Dauntless Weapons - From Worst To The Best

Dauntless Weapons – From Worst To The Best 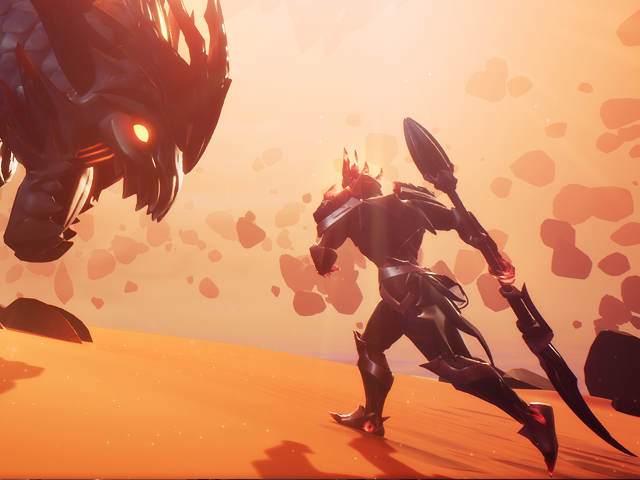 Dauntless is a new free to play co-op action rpg that has recently released its open beta. The premise of the game is somewhat similar to monster hunter. You are a slayer in charge of keeping the peace in Rammsgate (dauntless’ first and currently only city). How do you keep the peace? You slay big monsters with big weapons. Picking between the Dauntless Weapons is a difficult task.

Currently dauntless has five weapon types which all have a different playstyle. Each weapon has a different role to fill in a group setting. Although each weapon is useful in its own ways some weapons clearly outshine the others. With that in mind we created this tier list to help out new slayers on the battlefield ranking each weapon type from worst to best.

The war pike is a fast spear with a unique wound mechanic. Each strike made by a war pike causes both part/raw damage (yellow/green) damaging the Behemoth’s HP and part, and wound damage (red). Each behemoth part has a separate wound hp bar that when depleted causes a wound to that specific part. Wounded parts take 25% more damage from the war pike and 50% more damage from other weapons.

While the wound mechanic seems like a great support addition to any team, in practice the war pike’s damage output is low and by the time you can inflict a wound on a part it is most likely already close to breaking. The combination of the slow ramp up time to wound a part and the low damage output puts the war pike at the bottom of our list.

The chain blades are the fastest weapon in dauntless, designed to get in and out quickly. While using the chain blades your dodge roll is replaced with a short fast dash. The dash is a great tool for positioning quickly but terrible for actually dodging through a behemoth’s attacks.  The 2nd tool you have in your arsenal as a chain blade user is the weapon meter. Each use of a node from your meter can do one of two things depending on your position. If you are out of melee range pressing Q will launch the chain blades forward and grapple you to the behemoth. Pressing Q at melee range will perform a backflip creating some distance between you and the behemoth. 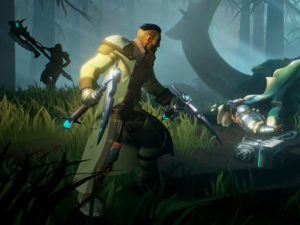 While the chain blades are fast, mobile, fun to use and my personal favorite, their low damage output and lack of a proper dodge roll ranks them second to last. The role of the chain blades is to inflict part and raw damage and they are simply outclassed by the other weapons.

The hammer is a slow massive weapon designed to inflict stagger (purple) damage. Each behemoth has a separate stagger HP bar that when depleted staggers the behemoth for a short period allowing you and your team to inflict massive damage. Acting as a support CC weapon a skilled hammer user will get several staggers on a behemoth during a fight allowing his team to go to town on a behemoth uninterrupted. 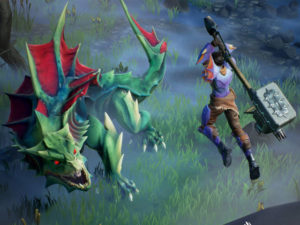 While the hammer is a great weapon in the right hands it has two major downsides. It cannot cut behemoth parts and its raw damage output is moderate. Another thing to note about the hammer is that it requires a somewhat high amount of skill from the user to really get the most of out of it. These downsides rank the hammer 3rd on our list.

The axe is a slow massive weapon designed to inflict huge amounts of part/raw damage in the right hands. Axe attacks can be charged consuming stamina and increasing the damage. The axe is by far the best damage dealer in the game. A good axe user can absolutely demolish a behemoth in minutes. Besides the raw damage output, the axe can also dish out high stagger damage making it an amazing tool for staggering a behemoth. 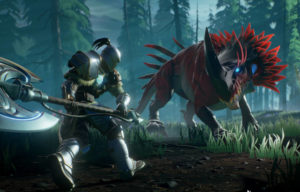 The only reason the axe is not number one on our list is its high skill requirement and slow attacks. Axe attacks are very slow and require careful planning. The punishment for missing a charged axe attack is huge. With the axe you are putting all your eggs in one basket. charging a massive attack that deals huge damage when connects and completely wastes your time and stamina when it doesnt.

Finally we reach what I consider the best weapon in dauntless for newbies and experienced slayers alike, the sword. The sword is your all around jack of all trades weapon. It has high damage output, can dish out fast or slow attacks, and can inflict a moderate amount of stagger damage.

The sword simply does it all, need to get in quick to throw some quick attacks? Sword has your back. Your hammer friend staggered the behemoth? Get in there and for some big burst using your meter and heavy attacks. Behemoth is close to staggering? Help out your team by bashing that head for the stagger. This swiss army knife nature of the sword is the reason we rank it number one as the best weapon in dauntless.

Do you agree with my list? Think I’m an absolute fool?  What is your favorite weapon in dauntless? Join our facebook and let me know!