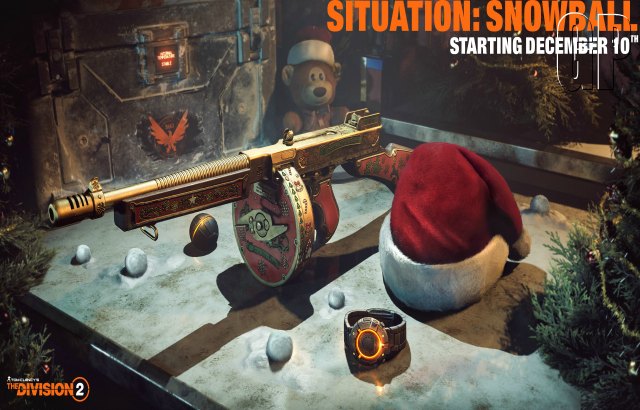 For all Division 2 agents, this year’s holiday event will be a fun one. Ubisoft has announced that beginning December 10th, players will see Title Update 6.1 (TU 6.1) drop which also features the Situation: Snowball in-game event.

During the event, ome of Washington D.C.’s most elusive enemies have taken to wearing a bright red Santa Hat, and are taunting you about it! Taking these enemies down will drop a new, exclusive weapon that shoots snowballs. This makes a great addition to all the exotics in your arsenal, should you feel the urge to break out some fun.

As part of this in-game holiday event, all players logging-in to the game between 10th December and 7th January will get their own Santa Hat to celebrate the holiday season.

Also included in TU 6.1 is The Silent Night apparel event, bringing with it a dark winter theme. The Silent Night Apparel Cache features 35 new apparel items to collect. All players who log into The Division 2 during the event will receive one free key, with Year One Pass holders earning an additional three keys as a bonus.

Starting with the Silent Night apparel event players will now also have the option to purchase Apparel Event caches with Premium Credits and directly send them as gifts to friends and clan members.

In addition, a beta version of the new Hardcore Mode will be part of Title Update 6.1.  In this new mode, death is permanent, making the entire The Division 2 campaign the ultimate challenge for Agents. Since there is no chance to respawn, Division Agents must be tactical and careful to see how far they can get.