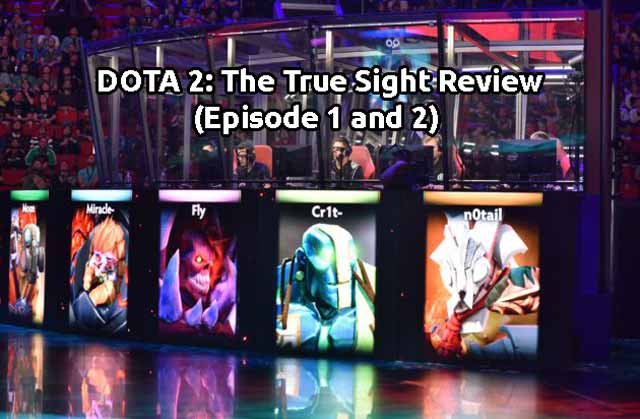 Valve Corp. decided to produce an episodic series, showing fans of the current top MOBA game, DOTA 2 about the lives of professional gamers. In episode 1, we observe the two teams, Evil Geniuses (EG), top contender and were once champions of The International and team Fnatic, an Asian team built based off their leader’s influence, Mushi. Mushi hails from Malaysia and was regarded as one of the best mid-lane players in the world.

This series shows how much communication matters between team, not just language diversity but the ability to initiate one as well. It also emphasizes on how hard it is to make it to the top and playing DOTA is not just a game, it’s the opportunity of a lifetime. Aside from the large money, the title of champions matters the most to them.

Having Peter “ppd” Dager, the captain of team EG and the superstar veteran player, Clinton “Fear” Loomis retire within the same timeframe, the team were utterly gutted. While Fear had stayed to become their coach, there was an empty hole that could not be filled. New members such as Zai and Cr1t joined the team, hoping to take the ropes and become their new leader. The one and only Twitched-streamer and long-time “memer” Artour Babaev or Arteezy had also returned to EG. Throughout the entire world, Artour was regarded as the best carry player but the man himself has never won The International (TI) and with his large fan base from streaming supporting him with some sarcasms imbued; he is anticipating to win it this year. Arteezy has jumped from team to team especially to Team Secret and EG mainly because he has a short temper and is difficult to play with, but that just means that his passion and hunger is much greater than others.

We also see many funny sides of EG besides the scrimmages and hardcore training. We see the boys waking up, half-naked, sore-eyed and exposing themselves. Hilarious jokes and probably insensitive ones were made, but who cares. We love it. Wonder boy, Suma1l singing Justin Bieber’s song, having his voice cracked in the car, Artour trying to dig some ice cream from Cr1t, Universe’s badminton skills and much more. While there is a lot of pressure, they certainly know how to release the tension.

• Fnatic: Will Mushi ever gain his rightful place?

In team Fnatic however, they started off by getting together in their headquarters, located in Mushi’s house. They had Ohaiyo, a regular player on EG, the infamous Jimmy “DeMoN” and two Phillipines player, Polo “Raven” and Nico “eyyou”. The boys enjoyed their first meeting going off on a holiday, cruising through the seas and riding around the woods.

However, they soon paid the price knowing that they should have prepared themselves to face the inevitable. Having different accents and terminology in DOTA, their teamwork was a mess and their play styles were all over the place. They were unfortunately eliminated from the qualifiers of the Boston Majors as per episode 2. Crushed to the ground, the members broke down as they realized how much they have slacked and how far behind they were. DeMoN and Mushi had their spat but eventually, Mushi stood down letting DeMoN draft for the final day. Each of them respected Mushi and idolized his “underdog-career” in the world of DOTA so much, that they wanted to support him into winning The International, starting with the Boston Majors.

Currently, Fnatic has been reduced again to Mushi and Ohaiyo with the other members leaving.

Although they had just formed their team and getting it together, the disappointment was overwhelming and each needed their own time to recuperate. Fans also supported the decision, acknowledging that this is the best and only way to go.