DDragon’s Prophet is an action orientated MMORPG with a unique dragon taming game mechanic that allows players to become dragon riders; the game is set in the fantasy world of Auratia where a power-mad dragon named The Devourer has broken free of his prison and is once again threatening the world.
It was developed by Runewaker Entertainment and was released in 2013 however the North American servers were closed by the NA publisher, Daybreak.

There are four different classes to select from with in-depth customization to create unique characters; players are able to have up to five characters per server with no limits on how many servers they can join. Each class has a different skill tree to select from and while this area does lack high levels of customization, it does allow players to select which skills they want to use in battle.

Combat in the game is nothing too special; players can auto-attack their selected target and select when to use their skills. Some skills need to be targeted at specific enemies or areas and most skills can be chained together for powerful combos. There is also a PvP system where players can battle in 1v1 duels or send their dragons to fight in 1v1 duels; in addition to this, the Frontier System lets guilds control territory and defend it from attacks by other guilds. 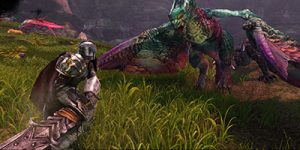 The biggest feature in the game is the ability to have dragons as pets; dragons can be captured, tamed and trained to teach them new skills. There are over 300 species of dragons in the game to collect and the Dragon Compedium helps the player keep track of the ones they’ve seen. Each dragon can be summoned to assist the player in combat and provide unique skills and abilities depending on the type of dragon. While the player can only carry two dragons with them to begin with, it’s possible to purchase more slots from the cash store; more dragons can however be stored in a Dragon Chamber which can be accessed at most cities in the game. These dragons can also be summoned when not in battle and can be used as mount to fly to another location.

Dragon’s Prophet does not innovate very much and follows the standard MMORPG layout; the dragon system is unique however and players are able to customize themselves further by obtaining dragons that suit their personal playstyle. This is still a strong MMORPG and has a friendly community while also offering players a fun dragon system.