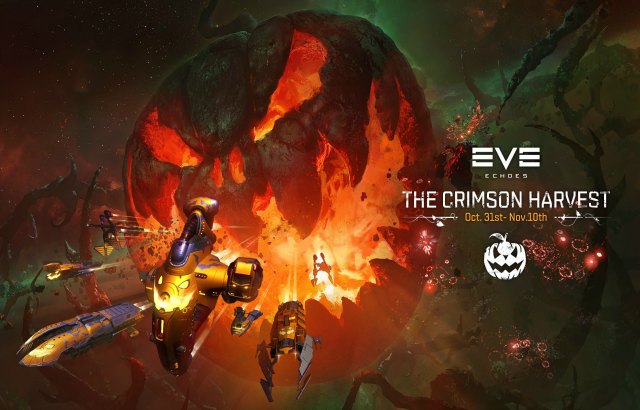 Bringing some much needed festive cheer to players, NetEase Games is excited to lift the lid on several updates about to hit its celebrated mobile MMORPG EVE Echoes, with the roll-out of brand new Halloween-themed ‘The Crimson Harvest’ event leading the line.

Brand new Halloween-themed skins will also be available in New Eden Store during the event. During the event, four kinds of different Skin boxes will be added, with some big discounts on some of these Skin boxes.

Neatly, the design of the Halloween skin was inspired by pumpkins, featuring an orange and black hull and an amazing flame-like effect when driving. These Skin batches will be on offer for a limited time – when the event is over, they will be removed from the store, and won’t be available as daily merchandise.

You can find full details of just what’s included within ‘The Crimson Harvest’ in this blog post from the development team: https://www.eveechoes.com/updata/20201022/33524_911499.html

During the event, both will appear in each system in the universe at random, with there naturally being a greater chance of low-level anomalies compared to the intentionally rarer high-level anomalies.

The 7 new Modules can only be obtained through Haunted Supply Boxes during the event. On Nov. 11, these Modules can be obtained in the normal ways, once we’ve finished some final tweaks to the pirate system.

Limited-time The Crimson Harvest Skins include:
·Limited-Time Skins will be available in New Eden Store during the event. The way Skins have been provided has been changed: during the event, we are adding 4 kinds of different Skin boxes.
·This batch of Skins are limited-time offers. When the event is over, they will be removed from the store, and won’t be available as daily merchandise.

October has seen EVE Echoes build on its growing popularity, with the game playing host to what may have been the biggest scale online battle in the history of mobile games.

Up to 1,200 players worldwide took park in an encounter between the Genesis Federation Alliance and OP4S alliance. With the former coming out victorious, the skirmish resulted in more than 1,350 ships being lost, alongside 61.2 billion ISK – EVE’s currency.

“We took control of the station grid,” said a spokesperson for the Genesis Federation Alliance. “As we tried to shoot enemy ships, they split their force between people who would shoot us and dozens of people who would undock and use the 60-second undock timer to cloud our overview with ships we could not shoot. In the meantime, the other fleet was free to use their other ships to attack us. When we identified those and tried to attack them, they would warp off and the undocking ships would shoot us from behind. Additionally, they abused the immunity to dock and undock guardian ships.”

Players can expect to see further battles of a similar scale take place during Halloween, both during and after The Crimson Harvest.