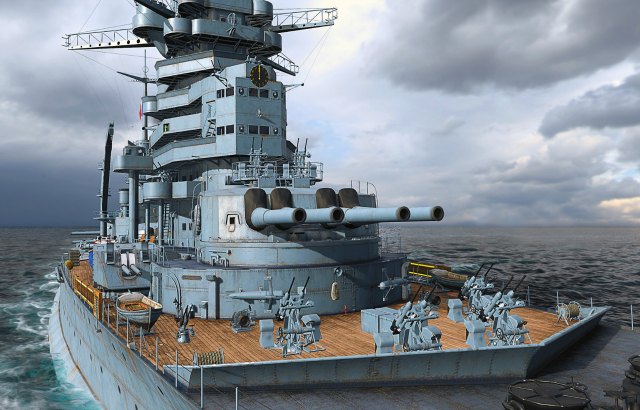 World of Warships: Legends have announced their first major update following their August Release featuring a new nation with new ships, commanders, and play-styles. In this update, the French Navy makes its debut, with the French Cruisers leading the way and the French Battleships appearing in early access. German Battleships are also released from early access, allowing players to work their way up to the legendary Bismarck! The update arrives September 16th, keeping the unending flood of content going.

The French Cruisers represent the core of the new French Navy and are renowned to be the most capable cruisers developed within the limits of the inter-war naval treaties. These cruisers are true speed demons with ships such as the Émile Bertin, capable of rocketing around the seas at an absurd 39 knots. These cruisers will certainly make waves in more ways than one thanks to their high speed and are packing a real punch—even at range! The French Battleships available in early access are both sleek and powerful. Their quadruple-gun turrets deliver intense salvos on any unfortunate enemies. Like the cruisers, the battleships are fast and able to respond quickly to incoming threats, making them some of the most adaptable battleships in the game.

To serve as captains for these new ships, some new French Commanders have joined the fray. These new commanders will help World of Warship: Legends players improve their French ships and bring new skills, giving them the opportunity to make even more powerful combinations.

The August release brought German Destroyers alongside an ambitious new campaign for the first Tier VII Premium ship. Naturally, to support the release of the French Navy players will get to take part in the new French Connection Campaign. The French Connection gives players the chance to earn more commanders and rewards for their fleet. Get various consumables, boosters, progression items, and Francs just by completing tasks in the campaign. Francs can be used to try and get early access to the French Battleships like the Lyon. This time around, the Admiralty Backing will massively increase the rewards from the campaign and will supply the player with one of the new French Commanders. This new campaign seems to be the perfect way for players to build their French navy.

Now players also get to individualize themselves on the high seas through the new patch system. In essence, you can create your own patch that will show off your achievements or style to every enemy you destroy.

German Battleships make their way out of early access in this update. Players can now get headed to the legendary battleship Bismarck at Tier VII. The German battleships are quite a force to be reckoned with and now everyone can get their hands on them!

The update brings quality of life improvements, balance changes, and the long-awaited 4K support for the Xbox One X. World of Warships: Legends in 4K resolution is a simply stunning experience.