Funcom have just livestreamed their Q3 Investors Report live on Twitch, and it was truly refreshing. Funcom’s CEO, Rui Casais, led the stream, and talked about many things ranging from the cash flow of the company to the current state of all their live games. I can’t recall ever watching a game company do this live – especially with its CEO at the helm – so this was truly refreshing.

Among the biggest news in this quarter is the positive cash flow that Funcom finds themselves in. Q3 is having a strong monetary rise compared to previous quarters, thanks to both Secret World Legends and Conan Exiles. Besides that there’s plenty of updates for the individual games themselves. Here are some of the summaries. 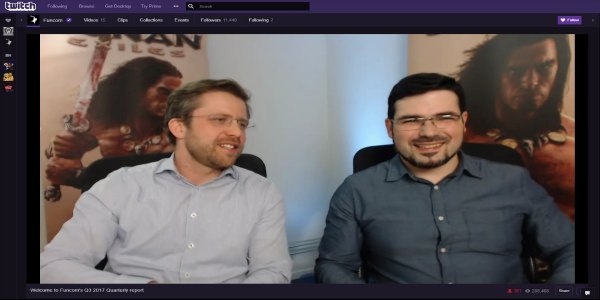 In short, the relaunch of The Secret World into Secret World Legends is a success. Funcom doesn’t do numbers sharing publically, but the revenue shows. For a free to play game, it’s doing a pretty good job with offering value from Patron status (Subscribtion) and of course, loot-boxes in the form of caches. There’s buying Aurum for real money too. The combination of all three is bringing in the money, which is good to hear.

On the content front, the developers aren’t stopping at having the game being just OK. They’ve realeased a pretty significant quality of life update today, and are working hard to push out Season two and other new content either before or by the new year. If you’re a Secret World Legends player, this is really good news and it’s much better times for the IP compared to any time previously.

Further into the slide, the duo then provided updates on the company’s latest title, Conan Exiles. CE is doing very well and ranks top alongside Secret World Legends as the main money maker for Funcom. The finances does not include Q3 Xbox sales for Conan Exiles, which most likely will be a boost in the next quarter. Additionally, the game will go ahead with the multi-platform full release sometime in Q2 instead of Q1. This is to ensure that the quality can be increased to meet expectations.

There were some blips for CE too, especially in China. Poor reviews in the region was blamed on community communication and localization efforts.

One beloved Funcom IP that didn’t get a lot of talking points was Anarchy Online. For many, AO is that classic MMORPG that got many into the genre for the first time. One might say that its got a cult following now. In the Q&A session, Rui and co did have to talked about the game quite a bit. Apparently, Anarchy Online holds a special place in the hearts of the studio and its staff. A lot of them have played it and would love to return to it someday. Anarchy Online 2 could be a possibility, but only if the time is right.

The outline for Funcom moving forward is to produce more games and release them as quickly as possible. It sounds simple, but it’s not. They have a bunch of ideas for standalone games that will go into production depending on how well their other live titles do. A lot of the information came during the Q&A session at the end, which was surprisingly civil. There was even a question (cheekily added) about the role of loot-boxes in modern games. Rui’s response dodged the bullet, but suggested that they do merit a place in games where applicable as a form of revenue, especially if the game is free. It’s a diplomatic answer and one we hope is practiced in Funcom titles like Secret World Legends where loot-boxes already exist.