Game of Thrones Season 7 Episode 5, “Eastwatch” is another Stark feel good episode. There’s plenty of reunions, on top of a fantastic battle scene. What were the 5 biggest moments from last night’s episode? This is a spoilerific article. You’ve been warned!

1. Dany Is A Lot Like Her Father Than She Thinks

The episode started on a fiery note. Jaime is alive thanks to Bronn, but the rest of the Lannister army were rounded up and brought to Dany and her dragon. The choices are to bend the knee, or die. Most chose to kneel, except the Tarleys. Both received the burn alive sentence, much to Tyrion’s dismay. Well, that makes Sam the rightful heir to House Tarly now. More importantly, it shows that Dany can be ruthless, and to be fair, she did offer them a choice. War is hell, and sometimes fire and brimstone is the only way. 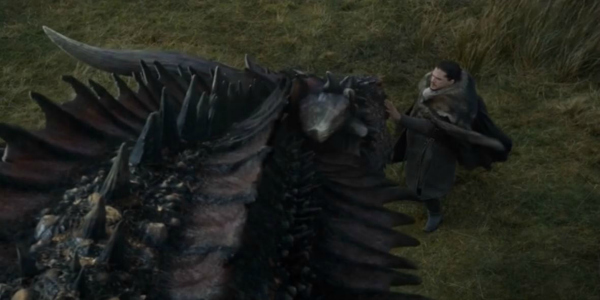 Let’s face it. No one in their right mind, and I mean no human being, would even attempt to touch a dragon while standing inches away from it. This was a goose-bump moment because we the audience already know Jon’s true heritage. This scene servers no exposition purpose unless it was intended to show us that the dragon knows Jon is indeed a Targaryen. It could also be a set up for future episodes, where he may be able to control one or even ride one for the wars to come.

3. Cersei Is Pregnant And Going Mad

Well, well, it seems the Queen is expecting another child, with Jaime named as the father. The reveal came moments after Jaime told Cersei he’d just met Tyrion who brings a message of truce. The twist is, she doesn’t care and warns her brother/lover not to betray her again. It’s becoming ever clearer now that Cersei is suffering from paranoia and is losing the plot. The proposed truce is really, to bring to light the larger threat that will wipe out humanity. She on the other hand, wants to use the proposed meeting to wipe out all her enemies. I wonder if that ignorance will come back to bite her. As for the Lannister’s new kid? Good luck. Poor old Jaime.

4. Unlikely Fellowship Beyond The Wall

In this episode we see reunions of all sorts. Among them, Ser Jorah Mormont and Gendry, both arrive at Dragonstone to serve. Jon convinces Dany to let him leave, and to bring back a live White Walker as proof to show Kings Landing that they are real. She finally agrees, and Jon, Davos, Gendry and Jorah make up the hunting party heading back North. When they do get to castle black, they stumble upon The Hound and the Brotherhood of Light locked away in cells. Seeing that everyone is on the same side, Jon agrees to allow the Brotherhood to accompany his own party North, while their objectives may be different. This will make for an interesting episode next week.

5. Littlefinger Is Setting Up A Sibbling Rivalry

Towards the finale of episode 5, we get to see what Littlefinger is really up to. It’s clear he’s rooting for Sansa. But he wants her in-charge and not Jon and anyone else in the family. To do this, he’s exploiting a bit of tension that’s been growing between the Stark sisters. He leads Arya on an espionage adventure, and left a scroll intended for her to find. The letter is a the exact same scroll that Sansa sent to Robb way back in season 1, asking him to bend the knee (at Cersei’s mandatory request obviously). Arya of course, doesn’t know the full story so now she’s got bigger beef with Sansa. Well played, Lord Baelish.

Game of Thrones S7 Episode 5 is a more sombre episode compared to last week’s action packed episode. The war may be on hold as one side is now taking the Northern threat seriously. Elsewhere, a lot of questions have to be asked too about Sam and what he plans to do next having left the Citadel. Next week can’t come fast enough. To read last week’s episode 4 recap, click here.