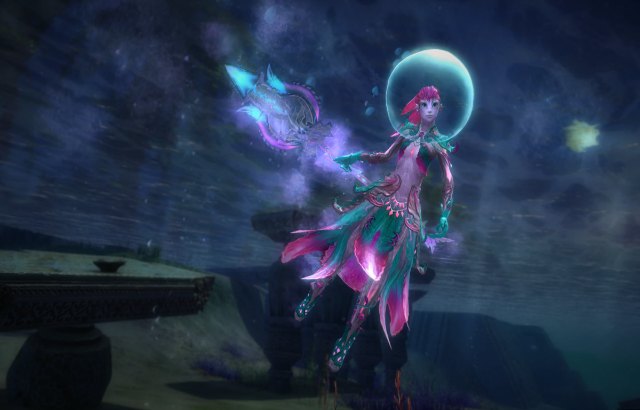 Guild Wars 2’s latest update has tweaked underwater combat in the game. This came out of the blue, and one wonders why it took them 6 years to do something about underwater combat and content. Prior to the update, it’s fair to say that underwater in Guild Wars 2 is an amazing experience. Plenty of of MMORPGs have tried to incorporate a world, zone or part of a map with underwater content and haven’t been able to match what GW2 can. Movement is fluid, the vistas are incredible and of course, there’s character progression content down there too in the form of Hero Points and more.

So why hasn’t it been as popular or well regarded over the last few years? Majority of the game’s new content updates are always on-land, and this is the case for every MMORPG out there. What’s the deal with the sudden tweaks to underwater combat? One of the major tweaks this update was to make underwater combat match the fluidity, balance and pace of combat on land. Having played for quite a long period, I can say that these intentions have been met. Underwater combat definitely feels swifter and fluid than ever before. Monsters underwater take the same amount of time to kill on land, which is a realistic reflection of a player’s gear progression and stats.

Intriguingly, the update doesn’t end there. There are now new content for players in the depths too. Sunken treasures can be found across bodies of waters in Tyria, and it comes with accompanying achievements. Players receive a key daily from a daily quest of killing 10 Kraits, and can then go open sunken chests wherever they find them. What’s in those chests? You can expect gear and currency, but most importantly, you will receive a new trade able currency called Swim Speed Infusions.

These Swim Speed Infusions will be used to barter for a better tier of infusions from the new NPC in Lion’s Arch. The real candy however, are the Ascended level Aqua Breathers that’s up for grabs. It costs gold in addition to 500 or so Infusions, so it may take a few weeks of dailies to get it. That is all the new content for now that’s available for players to enjoy the new underwater changes. I do believe however, that this is a prelude to something bigger. Maybe there’s a new underwater zone in the works for the next episode of the Living World Story. What do you think?