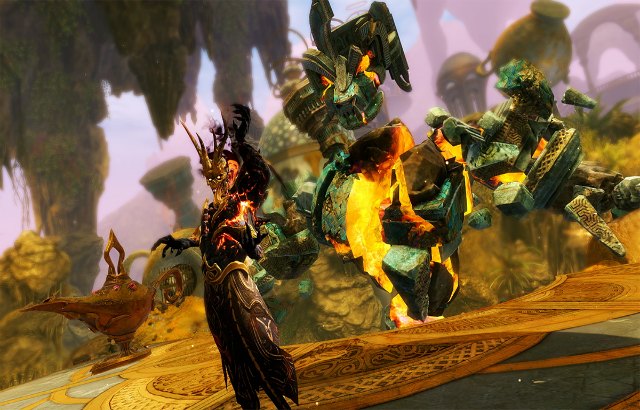 Guild Wars 2’s latest episode, A Star To Guide Us is now live. This is the fourth episode in the current fourth season of the Living World content cycle. And as you’d expect, there’s plenty of story goodness, boss fights in instances and more. This guide covers the overview of every major boss or mechanic fight in your personal story instance playthrough. There will be some minor Guild Wars 2 story spoilers, so keep that in mind.

In A Shattered Nation, players are summoned to Jahai as Aurene has crashed an important delegate summit. While diffusing the situation, Jahai Fortress comes under attack by Kralkattorik’s Lietenant, a Death-Branded Shatterer. This is the first mechanic fight of the new episode.

There are plenty of delegates in the area and you must guide them to safety. Players will get a Special Action Button (-) and hitting it you can aim your AOE on survivors, which then calls them to you. The objective here is to break survivors out of crystals and move them to the exit doors. The achievement is to not get hit when the dragon interferes, and not letting any survivors die.

Legacy is the Chapter that unlock Sun’s Refuge. However to get it, much work is required as it’s been abandoned for years. Upon reaching you, Braham, Koss and Kossan discover ancient spiders and this leads to the first boss fight. The giant spider here needs to be killed in 7 minutes or less for the achievement. There are flame braziers located in different corners that need to be lighted. Simply run to one and start the fight.

DPS-sing the boss down to 75%, 50%, and 25% starts phase two, where the spider disappears. Multiple spider adds then spawn you must keep them away from Braham while he’s lighting the brazier. If a spider gets too close, Braham gets feared but you can use your special action button to break fear and get him back on lighting fires.

The second boss fight this instance happens when a Rift appears outside Sun’s Refuge. You’ll have to fight a Branded Riftstalker alongside Braham, Eir and Snaff. The mechanics here are all about DPSing until the boss moves to phase two, rinse and repeat. Phase one players can safely burn the boss, but watch out for his ring AOEs. You can clearly see the safe spot to stand in. Around 60% and 30% he enters phase two and is invulnerable. He drops pods around and you must destroy these ASAP or they hatch and shield the boss.

Chapter Four: From The Ashes

This chapter contains the best boss and mechanic fight in the episode. Players must take on a Priestess of Balthazaar Deadeye named Zafirah – new to Guild Wars 2 lore, who stole Balthazaar’s Sword which we need to retrieve. The map here is filled with poison and we must make our way to the buildings at the back. Moving between obstacles is the trick, as Zafirah will line up a sniper shot when you’re out in the open. Don’t get hit – she does a lot of damage and knocks you down. When you reach her, the fight begins. Bring plenty of Power/Condi with self defense for this one, as her melee and range attacks hit like trucks. At 70%, she moves to another corner of the map and you must make your way to her via the poison map again. This time, adds will spawn that blow up when they reach you, so use your dodge to avoid them. Repeat the fight and she moves again until it’s over.

In the final chapter, there’s isn’t a boss fight but it’s made up of mechanics. In part one, we defend Blish as he sets up the tracker from waves of adds. Any AOE/Condi build will shine here. Make sure adds don’t interrupt him for an achievement. In phase two, players must mount their Raptor and escape the storm of death. This part tends to be buggy, but taking the left pathway from the first arch seems to work and not kill you for going out of bounds.

From then on, just keep jumping forward, following the orbs that grants you a full endurance replenish as this helps with the upcoming jumps. Eventually, Glint opens a Rift back out to Jahai and you’re done with Guild Wars 2 and A Star To Guide Us!