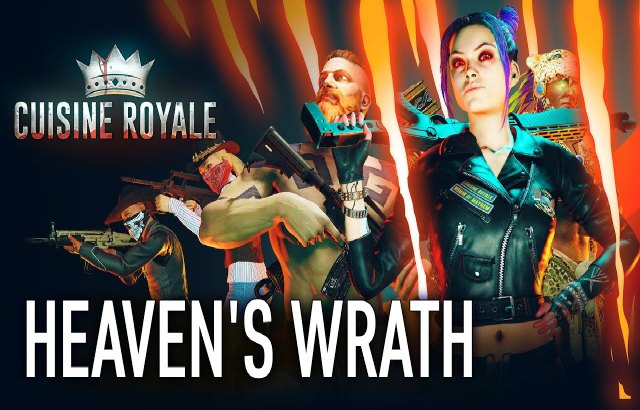 Gaijin Entertainment and Darkflow Software studio announce the release of the “Heaven’s Wrath” Content Update for the brutal online shooter Cuisine Royale. Now the game Champions can tear enemies apart with cannon fire from armoured vehicles, crush them with meteorite showers and burn up foes with Molotov cocktails.

The Cuisine Royale arsenal is gradually getting more and more new legendary weapons. The latest additions are the infantry modification of the Soviet Mosina rifle, the German MP 41 submachine gun and the American Colt New Service M1909 revolver. The most terrifying shiny new weapon is the Molotov cocktail, the famous WW2 era handmade incendiary grenade. Burning liquid from it sticks to the enemy and deals them damage even after they have flown the explosion zone.

The list of vehicles available in Cuisine Royale is updated with a couple of new ones carrying guns – for the first time in the game. The Luftvärnsterrängdragbil M40 is an anti-air SPG with a 40mm autocannon with 20 shells. Metropolitana is a recon vehicle with a 20 mm autocannon and 100 shells. Players should take the gunner seat to operate these cannons, so a team of at least two people is needed to both drive and shoot the enemy down. These vehicles appear on maps randomly and are quite rare, so it is highly recommended to equip a special item that detects them at distance. For example, leopard panties will do.

This Update’s signature Heaven’s Wrath ritual summons a deadly meteor shower targeted at a number of random spots within the safe circle. The other cool feature is the Shield ritual that creates an ice block in front of the user that is able to withstand some of the incoming bullets. It’s a valuable aid in a situation where the enemy has you under fire in an open space. The Molotov Cocktail trap sign spawns an incendiary grenade right under the enemy’s feet. Finally, the Ritual of Second Wind temporarily allows all Champions in a battle to use their special abilities without any cooldown.

The full description of the Update is available at the official Cuisine Royale website: https://cuisineroyale.com