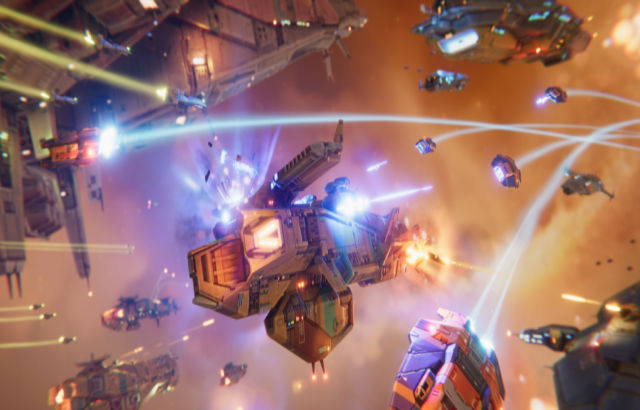 Embark upon a journey to settle an unexplored galaxy in this adventure. Acquire resources, recruit officers, upgrade your fleet, engage enemies, forge pacts, and lead your fleet in this Homeworld-bound odyssey.

Over a century since the original exodus and rediscovery of their Homeworld, the Hiigaran people have overcome trials and galactic foes to finally bring forth an era of peace and prosperity. The Hiigarans now look beyond the Whirlpool Galaxy as they look to explore and settle an uncharted universe through the Hyperspace Gates.

Choose one of many factions of the Space Fleet belonging to the Hiigaran Navy as you embark upon missions to explore the outer reaches of the universe in search of resources and new friends or old foes. Compete against or form alliances with fellow settlers from different factions as you chase the trail of the Progenitors. Will you search for archaic clues as a researcher of the S’jet, bring glory and prove your might as a proud member of the Soban, or find a place to call home as the outcast Kiithless?

Engage upon truly dynamic real-time strategy and combat as you control spaceship carriers, interceptors, and destroyers to outmaneuver opponents and employ tactics to gain the upper hand.

Dynamic RTS Combat in 3D – Maneuver your ships in real-time, select and deselect individual units to adjust formations or focus targeting, and engage missiles and lasers to bring down enemies with intuitive free rein controls.

A True MMO – Form alliances or compete against fleet commanders from around the world with co-operation gameplay modes and large-scale initiatives.