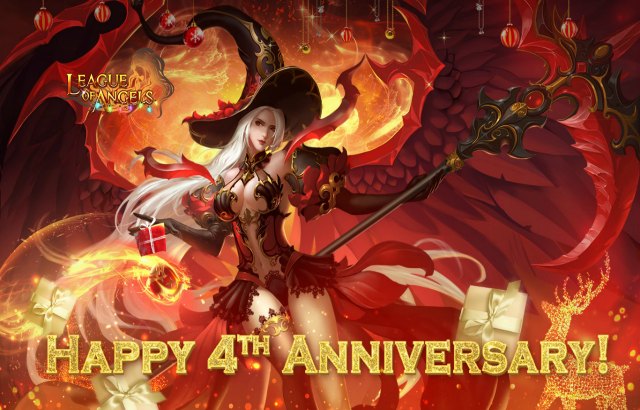 From 7th until 12th December, players can gain numerous rewards by participating in the 4th Anniversary Event Tycoon. In order to gain Tycoon Points and be ranked on the list, players need to collect certain items by completing daily quests and additional special events. The higher the ranking, the greater the rewards. Top-ranked players can even unlock the latest Angel Medea. In addition, each day at 2 pm and 10 pm (server time), the point leaders will be determined, and prizes will be awarded accordingly. The grand prize will be issued at the end of the event.

The Happy Birthday Event will also take place during this week of celebrations. Players will have the chance to unwrap birthday gifts and receive Homestead Decorations. These ornaments are precious items that can be used to decorate the players Homestead and, in turn, increase character’s Battle Rating.

Furthermore, players are also encouraged to check-out a limited-time offer on December14th. On that day, each recharge of one Diamond grants one additional Golden Leaf, the amount of which resets daily during the event time. 4thAnniversary Equipment will also be issued from the 11th until 15th December in the Hot Events section.

Other anniversary events include Lucky Capsule, House of Card, Djinni’s Merchant (All from 9th until 12th December), Angel’s Party (From 10th until 12thDecember), and Wheel of Luck (From 13th until 15th December). Check the event section for rules and details and join in the four-year anniversary celebrations, only at League of Angels!