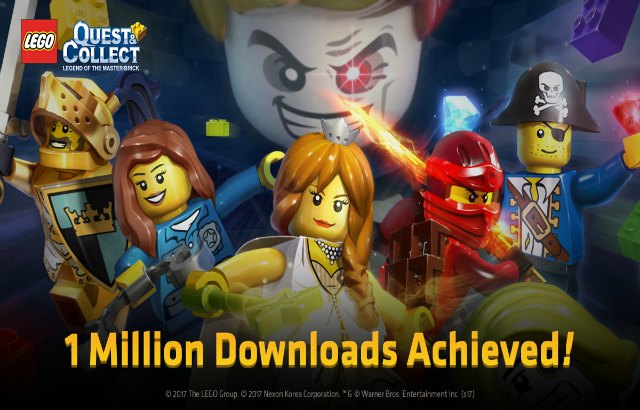 Mobile RPG Lego Quest & Collect has reached over 1 million downloads in two weeks since its launch. Developed by Nexon TT Games and Lego, the game has surged into the Top 5 apps downloaded on both the App Store and Google Play. The game is set in the Lego universe and allows players to collect famous Lego heroes. It also features squad based combat through various stages to defeat recognizable villains. Expect various modes from PvE, Daily Dungeons and even 3v3 matches against other players in the game’s PvP mode.

The game aims to continue rolling out new content, beginning with introducing a new game mode. World Boss Raids will be the latest mode, which features popular Lego villains who will appear as bosses. Players can use up to 10 fan-favorite heroes from the Lego universe and team up with other players to take on these bosses. It’s an MMO type feature found in a mobile RPG, which may be appealing to many of you out there. Should your raid against a World Boss succeed, you will be rewarded with up to 1,500 Crystals to use in-game.

To celebrate the milestone, Nexon will be running various in-game events until the 23rd of August. Players who participate in World Boss Raids will also be rewarded with additional Crystals. For more information or to check out the game, head to the app page here.