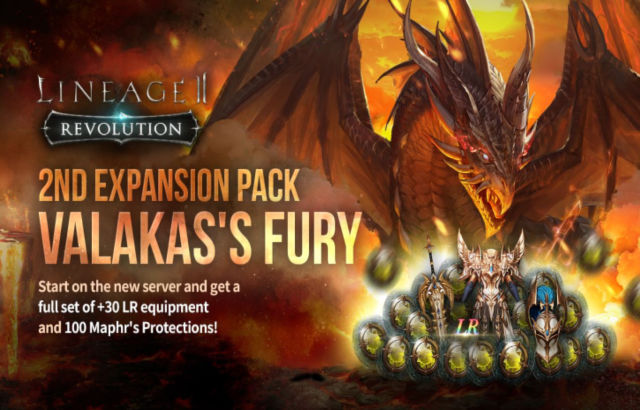 Netmarble’s popular mobile MMORPG Lineage 2: Revolution received a new update that introduces the second Expansion Pack:  Valakas’ Fury to players alongside an assortment of new content and improvements from Season 1 thanks to the community’s feedback.

Season 2 of the expansion pack adds four new expansion heroes – Pan, Miro, Liza, and Elizabeth – alongside a new 25-player Valakas Raid, and a new Expansion Temporal Rift themed after the expansion pack. In addition to various improvements players can look forward to thanks to community feedback on the first expansion pack: Antharas’s Rage, beloved Player vs. Player (PvP) battlefield, “Hero Honorable Battlefield” will also return for players to experience during the expansion season.

To celebrate today’s update, Netmarble is opening new servers : Kastien (NA), Khadia (EU) on 7/22 (EST) and is launching a four-week in-game event that will allow for expedited leveling and increasing combat power for the community. Players can look forward to rapid growth for their equipment, agathion, elixir, and mount strengthening alongside a handful of rewards. These include 2x LR Grade Indomitable Attribute armor, an LR Grade Disintegrate Attribute weapon, a Rare agathion selection box, and 100x Maphr’s Protection.