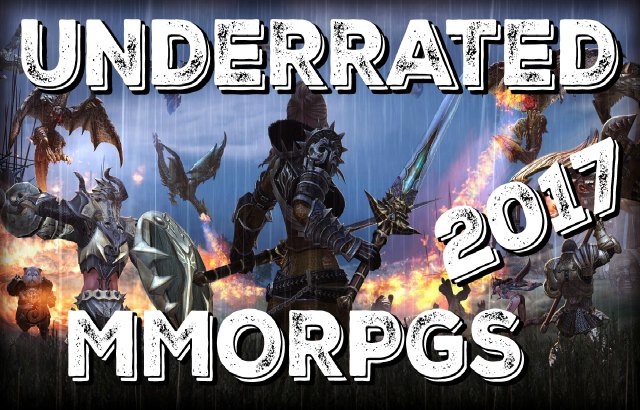 are going to be taking a look at the top 5, most underrated MMORPGS that are out there today. Tons of MMOs have come and gone, and there are a few that have been out for while, but have remained stagnant, or continues to fly under the radar compared the amount of publicity and hype their competitors get. Based on that criteria, we’ve selected our list from a pool of MMOs that have been out for at least three years, of the Triple AAA variety, but are not in the top 5 of most played or populated MMORPGs, despite being acknowledged by critics as good games.

At number five, is DC Universe Online. Despite being a widely known IP and garnering good reviews from critics at launch, DC Universe Online continues to fly under the PC playerbase radar. For an MMORPG, DCUO doesn’t do a whole lot wrong in our opinion. It’s a free to play game that’s based of superheroes and villains from the DC comic universe. And for the most part, the game revolves around these characters through plot and story lines, without players actually playing as them.

At release, DCUO was a great alternative to the much beloved City of Heroes, which was the more popular of the two before it got shut down. DCUO is known for it’s pretty in-depth player character creator, allowing you to build the perfect hero – from costumes and outfits, to powers like flying, and finally, you’re able to choose a mentor type figure such as Superman or Batman, who will be the one handing you missions and stuff.

From a game play stand point, DCUO is action-combat based, with players using a smaller pool of skills compared to other MMOs to battle. The regions are authentic and let’s you visit authentic locations such as Gotham City and Metropolis. There are a bunch of quests to do, but the majority of your time will be spent in the main story line, with dungeons thrown in. It’s got a decent recipe for an MMORPG, so why do people still think it’s underrated? Well, we think that the dip in the PC playerbase for DCUO is very much down to the fact that the game released on the Xbox and Playstation in recent years. The gameplay feels a lot better with a controller for consoles than it does for the PC. So what must DCUO do the recapture it’s faltering PC player numbers? Let us know your thoughts in the comments below!

At number four, is Star Trek Online. STUO is another big IP on the list, developed by Cryptic Studios and published by Atari, before Cryptic shipped it off to Perfect World Entertainment in 2011. STO is as you’d expect, a pretty faithful MMORPG interpretation of the Star Trek Universe, set in the universe timeline of 2409, thirty years after the events of Star Trek: Nemesis.

A lot of players flocked to Star Trek Online because of what it offered – a solid MMO story based on a beloved franchise, and space combat with ships that every player, will get as a captain. There was so much potential, and remember, this was released in 2010, a full year before Star Wars the Old Republic was released, so as you can imagine, space opera fans only had STO and EVE Online to sink their teeth into.

Seven years on, STO is still around, but it hasn’t really recaptured the magic and hype it generated outside of loyal Star Trek fans. New updates in the past few years have not really brought in new players, which is a worrying sign for any MMORPG. The graphics may seem dated today, but STO still has a lot to offer and that’s why it’s on our list of most underrated MMORPGs.

At number three, is The Secret World aka, Secret World Legends. The story of how this game is still relatively unknown among the broad MMORPG player base should be studied and archived for all MMO developers and studios to reference in the future. When Funcom first announced The Secret World, there was a mixed buzz within the MMO community – no one knew what to make it of it. The game is set in a modern world with secret societies such as the Illuminati and Templars all vying for power. Myths and legends such as vampires, mummies and Cthulhu all exist, and formed the main narrative of the game.

When TSW finally got a launch date, it picked perhaps the worst time imaginable – between Diablo 3 and Guild Wars 2, and sadly, not a lot of marketing and promotions could save it no matter how hard it tried. The game has a quite a large loyal fanbase due to it’s excellent story telling and in particular, its fresh approach to MMO questing with investigation missions, requiring players to solve puzzles, use an in-game browser to research and even deciphering Morse code – at the time, that was unheard of in MMOs.

But ultimately, the game never got it’s population very high and had to drop it’s subscription status for a buy to play model. Today, The Secret World is relaunching as Secret World Legends and will be completely free to play. We can only hope that the relaunch will bring a much needed wave of new players to the game, because this is one underrated MMORPG that deserves its second chance. The relaunch has fixed old issues with the game, such as overhauling the combat system and much more.

At number two, is Wildstar. I think anyone can make a few cases for Wildstar – is it the most overhypped MMORPG in recent times or the most underrated? For it to be on this list, you pretty much know the answer. So let’s examine why.

Carbine Studios, made up of former WoW devs, created Wildstar, a sci-fi fantasy MMORPG that was apparently, going to challenge the big guns. It had an attitude, and it reverberated throughout every piece of news article and video content the game published prior to release. It was really confident – perhaps to confident – and even launched as a subscription only MMORPG, which fewer and fewer games do these days thanks to the dominance of World of Warcraft. Known for it’s incredibly challenging dungeons, interesting PVP telegraphic combat and quirky stories, Wildstar was a hit – for a bout a year before the players begin returning back to whatever MMO they came from.

Wildstar eventually went free to play, and popped up on Steam last year. So what went wrong for this so called WoW killer? Lack of content updates, long running bugs, exploits, botting issues, class balances and so much more – on top of that, add regular staff layoffs and management changes and the result is pretty obvious. It’s a real shame because beneath the surface, Wildstar is actually a really good MMORPG that offers everything a modern MMORPG should offer – and they give it to players for absolutely no charge. It’s a wonder why the game hasn’t attracted a bigger audience since becoming F2P, which is why it will continue to be underrated for some time to come.

At number one, is TERA. By now, 3 out 5 people watching this would have heard of or played TERA before. The problem is, that even being free to play and out for almost five years now, TERA is still in the wilderness when it comes to picking a list of the top MMORPGs.

At release, TERA was pretty much nailed by majority of critics for being boring and uninspiring with the game’s characters, lore and story. Most will not give a crap about anyone or anything in-game, and the lasting appeal was relatively poor, and most who hit the level cap will never stay around for the grind and move on. Valid reasons, but the one thing everyone universally agreed with at the time was that the combat system was way ahead of any other MMORPG out in the market today – and keep in mind this was before Guild Wars 2 was released.

Today, TERA’s combat still holds up and it’s that action packed flexibility that makes it incredibly fun – it’s even coming to consoles. The sad part is, the game has improved over the years since release, but due to the very early criticisms, that side of the game was never reported on as much which is why TERA continues to be left out of the MMORPG conversation these days. Had it been released way back in 2004 before World of Warcraft, than I’ll have to agree with IGN saying that it could have been the poster child for how MMO combat could have been defined. It’s still going though, and is undoubtedly one of the most underrated MMORPGs in the modern era. You can get started on TERA right now for absolutely free. Check it out!