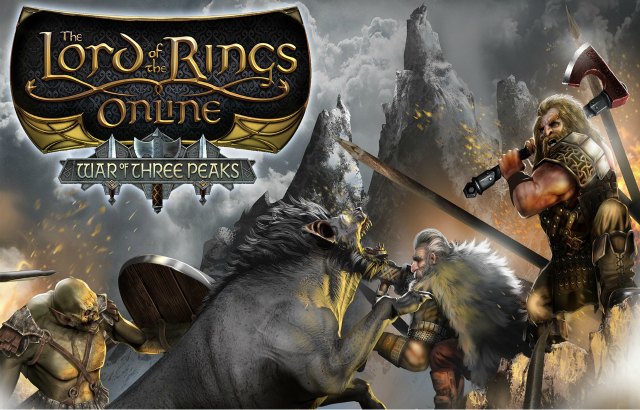 The Lord of the Rings Online aka LOTRO, has launched its latest expansion the War of the Three Peaks today. Available from the LOTRO Market, the expansion comes with three tiers for purchase, and introduces brand new content to the MMORPG. Learn more about its features via snippets of the patch notes found below.

Prince Durin, son of King Thorin Stonehelm, leads his armies to reclaim Gundabad, the Mountain-home of his people! As the Longbeards, Zhélruka, and Stout-axes assemble to lay siege to the great fortress, Orcs led by Gorgar the Ruthless, son of Bolg and brother of Mazog, meet them in battle — the War of Three Peaks begins!

“The final battle of the War of Three Peaks has begun. Prince Durin Stonehelmson of the Longbeards leads the Gabil’akkâ , a great host of united dwarves, to the very gates of Mount Gundabad. But Gorgar the Ruthless, son of Bolg, has one last surprise in store for those who would seek to usurp him….”

“It is on the stairs of Bagûd-mekhem, the Gate of Winds, that a decisive battle of the War of Three Peaks is to be fought. There, caught between those loyal to Gorgar the Ruthless and Hrímil Frost-heart, the Gabil’akkâ hope to deal a devastating blow to both of these forces in a single stroke.”

“Prince Durin Stonehelmson of the Longbeards has declared his intention to retake Gundabad for the dwarves! He needs heroes like you to aid in the war effort if there is any hope of succeeding against the Orc army.”

Missions are a new way for one or two people to play together between levels 20 and 130! Players can access the Missions hub by visiting a Gabil’akkâ Stable-master, located near other stable masters including:

The Gabil’akkâ stable-masters will take you to the Annâk-khurfu (War Room) in Elderslade, where you can begin your experience with Missions. Missions are a great way to earn leveling loot and more, and are also an excellent way for players to level regardless of what level they are in the game. Check them out!