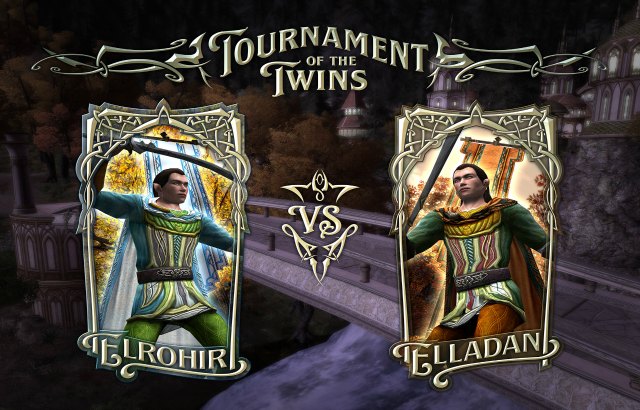 LOTRO aka The Lord of the Rings Online has started its first PvP event server, Bombadil, which is hosting what is now known as the Tournament of the Twins.

The sons of Elrond, Elladan and Elrohir, have begun a discussion with perhaps too much boldness, and are arguing about which of them would make the greatest leader and support the greatest heroes. Once you have reached level 10, you may take up the banner of either Elladan or Elrohir and venture forth to earn honour completing Deeds and challenging heroes that align with your rival. Brave players can earn rewards for completing Deeds, and those characters will appear in a special Leaderboard. Will you rush to honour your patron by completing Deeds, or will you spend your time challenging rivals?

This server is available to VIP subscribers From June 17th through July 14th. Find Bombadil in the game launcher when the world is available!

Rewards are unlocked for your account once a certain Honour Score is reached:

At the end of the event:

At the end of the Tournament of the Twins, players will be able to transfer their characters and shared items for free to any of the non-Legendary game worlds. Please note that standard restrictions and procedures apply when transferring from Bombadil. Note that when the Tournament of the Twins is over and players have had an opportunity to transfer off the server, the server will have a complete database wipe prior to future events.

The Register of Heroes will be published on LOTRO.com shortly after the event ends.