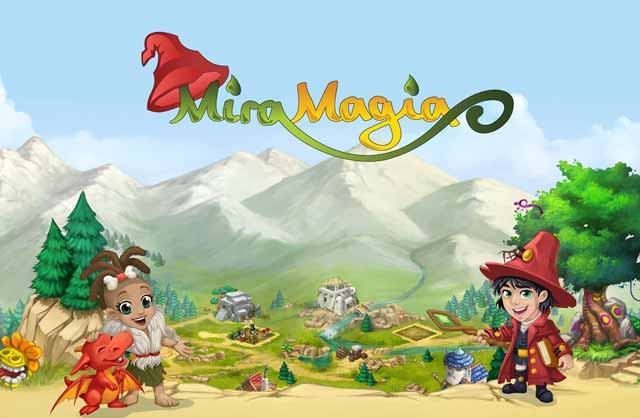 Miramagia is an web browser MMORPG developed by Travian Games. The game is not focused on combat system but more towards collecting and creating a home. Basically put short, it’s a farming game mixed with player interactions much like a Facebook Farmville with more magic involved.

As appropriate to its name, Miramagia characters are focused only on generic classes that fall under magic or spells. Each class in not gender-locked and interchangeable provided you have in-game currency to support yourself. You have the:

Honestly speaking, the graphics and style the developers were going for is suitable and great for this kind of game. Although it does reflect a little on the Smurfs’ Village, but none the less it is great. The detail of the environment and crops are as I would put it, not bad.

So what makes it so different from other farming games? Well unlike the conventional “do-it-yourself” style of clearing, planting and collecting crops. You use magic. That’s right, magic as Shia Labeouf quotes. You use your earthly bestowed powers to clear the land, grow some crops, build some important structure and cast spells to help you with that.

Quests are readily available upon completion to ensure that the player do not have to reac ha certain level to unlock quests. The quests are not difficult, possibly require more effort and time but none the less, easy to complete.

You get to exit your home and enter town where you can learn new spells, pickup new equipment and other stuff. The downside however is that you have to spend in-game currency to further develop and enjoy the game thoroughly.

Similar to other farming games, you can travel to other players villages, observe their achievements and help out a little to earn a quick couple of bucks and experience.

Dragons! That’s right you can grow your own dragon in this game. As far as I am concerned, I do not think you are able to ride or mount them, they are merely an achievement or much like an animal giving you timely products that boost your characters experience points and gold.

If you are into farming simulation games with a twist of character role-playing and development, give this a try. Though there are instances where it is pay-to-win but overall, it is not impossible to enjoy the game entirely free.

Get started and get your magical village on its way to the status of Hogwarts!