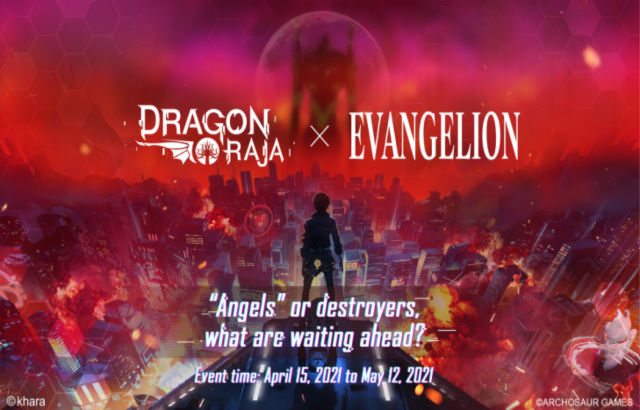 Leading developer Archosaur Games announced today its epic MMORPG Dragon Raja, which has gained over seven million registered users and won the Best Game award at the 16th International Mobile Game Awards (IMGA), has collaborated with one of the world’s most popular Japanese anime series, Evangelion, for a surprise in-game event that kicks off today. Players around the world will witness angels invading the world of Dragon Raja, participate in secret missions, and earn rewards including new outfits, accessories, and the exclusive Evangelion Test Type-01 vehicle.

In case you didn’t know, Evangelion is an iconic anime series that first released in 1995, becoming a hit in Japan and around the world. Development for the Dragon Raja x Evangelion has been in the works for more than half a year and brings players an abundance of subplots and in-game details to explore. For example, players will find the sky to look unusual in different places at certain times and they can also participate in time-limited activities to fight “Angels”.
During the Dragon Raja x Evangelion collaboration event, the special Evangelion Test Type-01 will be available. This unique vehicle certainly stands out with its purple and green aesthetics and sharp lines. Additional content, including four Evangelion-themed outfits and accessories, will also be available for players. As you can see, this is the biggest update since Dragon Raja has been released!

Dragon Raja offers a grand and vivid open world that players can freely explore, just like the real world. The game features a ton of different fun and real interactions, such as taking an epic fall on the slippery ground during a snowy night, having a cup of coffee by an open-air café, or soaking in a hot spring after a long day. Stunning graphics are another reason why Dragon Raja is so popular thanks to it being developed using the advanced Unreal Engine 4. The game brings unbelievably high-quality graphics onto mobile devices for the first time in any MMORPG.