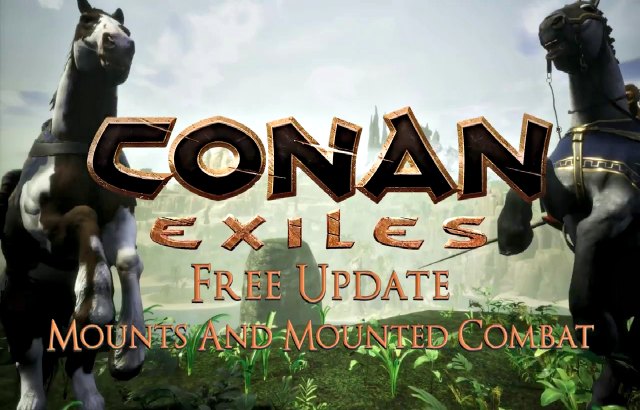 Starting today, Conan Exiles players will be able to capture foals, train them into valiant steeds and ride them into battle, as Funcom introduces one of the most sought-after features since launch.

The free update grants everyone the opportunity to acquire horses, cutting travel time significantly, as well as adding a powerful new aspect to combat. Players will now be able to joust, swing their swords and even fire arrows from horseback, potentially mowing down unsuspecting victims with lightning speed.

A new follower leveling system is also in place, meaning Exiles can gain experience points for their thralls, pets and horses. Followers will also be able to gain random perks, some of which are rare and powerful.
“Since the beginning, mounts and mounted combat have been a part of the dream that shaped Conan Exiles. It is gratifying and exciting to finally deliver on that dream and give players the mounts and combat experience that they have been waiting for,” says Creative Director Joel Bylos.

The free update is released at the same time as the new DLC Riders of Hyboria, which introduces a bunch of new decorative options, weapons and building pieces. Riders of Hyboria is available for $9.99 / €9.99 on all platforms and as part of the Year 2 Season Pass. It contains:
♦ 2 exclusive mount skins, one befitting the knight in shiny armor, the other perfect for a dark and gruesome warlord.
♦ 6 exclusive mount saddles, each suited for different playstyles, such as scout and cavalry.
♦ 25 new mounts-related building pieces, specifically designed so you can create your own stables.
♦ 3 new armor sets, including the fabled Poitain Cavalier armor.
♦ 11 new weapons, including lance, greatsword, katana and warhammer, all originating from the proud nation of Poitain.
♦  14 new decorative items, specifically designed to spruce up your stables.
All the new content in Riders of Hyboria Pack is exclusive to this DLC and adds a host of new visual options but does not give any in-game advantage in power. All the new items have comparable stats to existing items.

Conan Exiles is an open world survival game set in the savage lands of Conan the Barbarian. After a successful Early Access run starting in January 2017, the game launched in full on PC, Xbox One, and PlayStation 4 on May 8th, 2018 and became one of Funcom’s best-selling and fastest-selling games to date. For more information, see  www.conanexiles.com or the official Steam page.