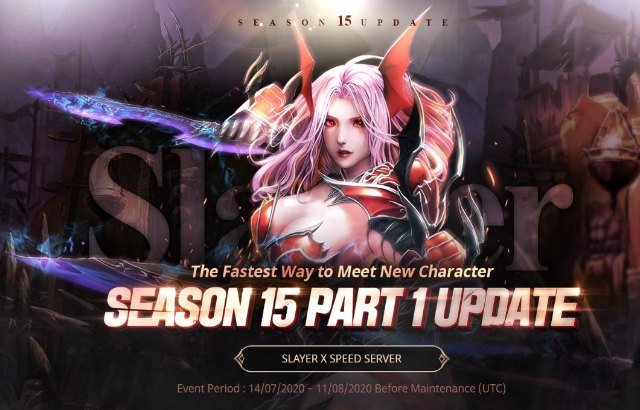 The main highlight of the update is the Speed Server opening, where players can level up their character faster to get stronger. Speed Server is even more special this time due to the addition of the 10th new character, Slayer, a half-human and half-bat character. She will be available in the Speed Server during the event period.

Coupon giveaways will be held to celebrate the update and to reward players with extraordinary gifts. The coupon will consist of the Slayer character card, Gold Channel Ticket (7 days), Blood Angel Box, +9 Divine Archangel Weapon (3 days), and much more. The exclusive event for the Slayer update will be ready, which provides the premium Muun of August to the players who transfer their Slayer character to the original servers after reaching level 700.

Additionally, the MU Online team has organized various events for the players to enjoy. During the event period, players can receive prizes just by playing the game. Play 40 hours every weekend to get Gold Channel Ticket (1 day), potions, weapons, and so on. Along with this, in the Speed Server, as players reach a certain level, plenty of unique items will be rewarded, so check out the official website for more details.

Furthermore, after playing in the Speed Server, players can transfer their character to the original servers. During the transfer, we will be offering special prizes such as Gold Channel Ticket (28 days), Legendary Dark Wizard Muun (30 days), based on the player’s character level. Players will also get to claim a bonus reward if they complete a mission after the transfer. Please do not forget to participate for amazing prizes.

For more information on the latest updates, features, and ongoing events, We would like to invite players to check out MU Onlines official website at: https://muonline.webzen.com/events/season15part1/update and join the official Facebook community at: https://www.facebook.com/MUWEBZEN/