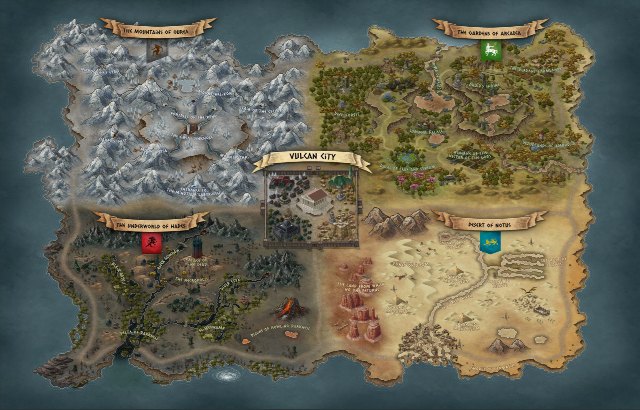 Explore, build, play, buy, sell and socialise with others in the latest NFT based fantasy MMORPG game. Designed by leading game developers, including award-winning gamebook designers Dave Morris and Jamie Thomson, VulcanVerse is a decentralized 3D world split into 5 different arenas: The Underworld Of Hades, The Gardens Of Arcadia, The Desert Of Notus, The Mountains Of Ourea and Vulcan City (which will remain a neutral public plaza for special events)

“The world itself is based on the premise that the God Vulcan was tired of mankind embracing virtual worlds and pushing Gods out of their lives, so instead of fading into the sunset, he embraces it by creating these four quadrants of land.” – Jamie Thomson, lead project designer and CEO of Vulcan Forged

Each arena is filled with its own lore, resources, development paths and Vulcanites – mythical creatures that players can collect, trade and power up based on the type of their land. Every plot of land and vulcanite is based on Non-Fungible Tokens (NFTs), making them unique and giving their holders full ownership. A wide range of vulcanites are being developed for each arena; from scary giant arachnids and friendly griffins to elegant centaurs and cool looking dragons.

In terms of gameplay, users can choose whether to simply visit, fly and interact with Vulcan’s Landmarks or own, build and level up their lands along the seven “Tiers to the new Olympus”. Reaching higher tiers will grant landowners access to further tools and benefits. Players seeking for extra playability can also create their own in-game smart contracts or leverage their Vulcanites to participate in monthly competitions and attack, defend, forage or spy on other lands to obtain additional resources.

Scheduled for a Q4 2020 release, the game will be released with a standalone application that will offer high quality audiovisuals and contain a 3D builder for users to design their own sceneries, customise characters and create their own artwork. A trilogy of novels is also currently being created by Dave Morris and Jamie Thomson; the authors behind the critically acclaimed Way of the Tiger series, Fighting Fantasy, Fabled Lands and the recent Roald Dahl comedy prize winner – Dirk Lloyd.

From 30th September 2020, game enthusiasts will be able to buy their first plots of VulcanVerse land (each sized 20m x 20m). Only a limited number of 10,000 will ever be created.

The project is a collaboration between the renowned Fabled Lands team, NFT engine developers Vulcan Forged and a selected group of leading 3D modelling and game production houses that includes Spark Labs, ServReality, Savage Labs and Horos Interactive. It’s not your usual building sandbox game but rather, it’s a virtual world with its own ecosystem, history, economy and more. VulcanVerse aims to become a player driven world, where new features and issue resolutions will be set and voted on by the players through Decentralized Autonomous Organisations (DAOs).