New World Is Delayed, So Here's Our CBT Impressions

New World Is Delayed, So Here’s Our CBT Impressions 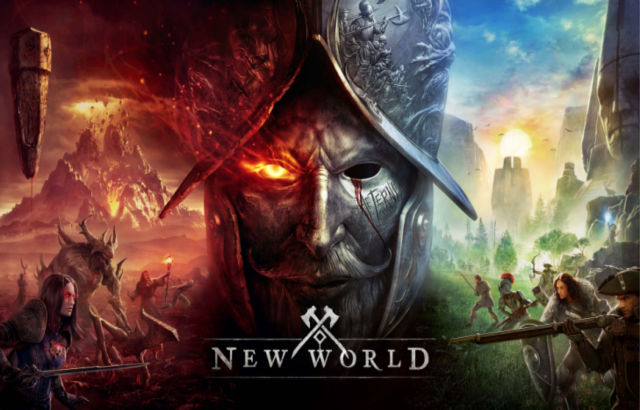 There’s only less than a week remaining for New World’s closed beta test, and so far Amazon’s MMORPG is getting a lot of hype. Having sunk a good chunk of time into the CBT, here’s some quick thoughts about what we liked about it and what we didn’t.

The World of Aeternum

New World begins with your character surviving a ship crash on the mysterious island of Aeternum. Every step you take outside of that intro tutorial is simply glorious, thanks to the immense world-building effort to make every territory biome look different and filled with lore pages, interesting landmarks and signature monsters. It truly feels like a whole new world waiting to be explored and conquered, which is what Amazon has managed to nail down right. Even on medium to low graphics, it’s a gorgeous looking game and one can spend many hours in it. 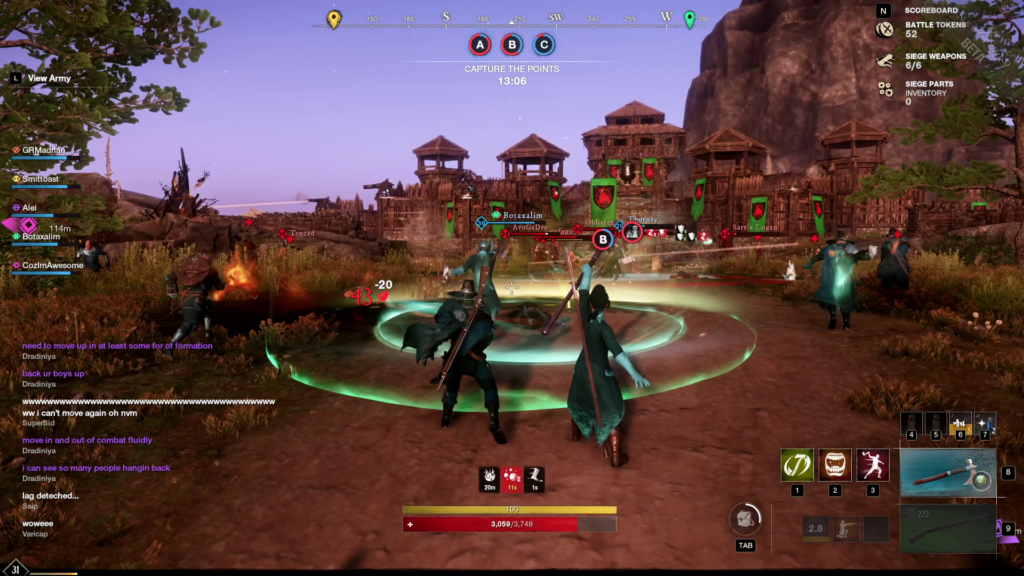 When New World was first announced and showed off to the public, Amazon presented an open-world PvP survival style MMO and we’re glad that in essence, that hasn’t changed. Today’s New World is still centered around PvP with territory control being key for PvP among the three factions, in addition to “flagging” up to allow PvP anywhere on the island. It comes to no surprise that PvP players will enjoy some of the content on offer, most notably Settlement Wars, which consist of 50 versus 50 instanced battles where control of a Settlement and Territory goes to the winning attacking group or the successful defense group. 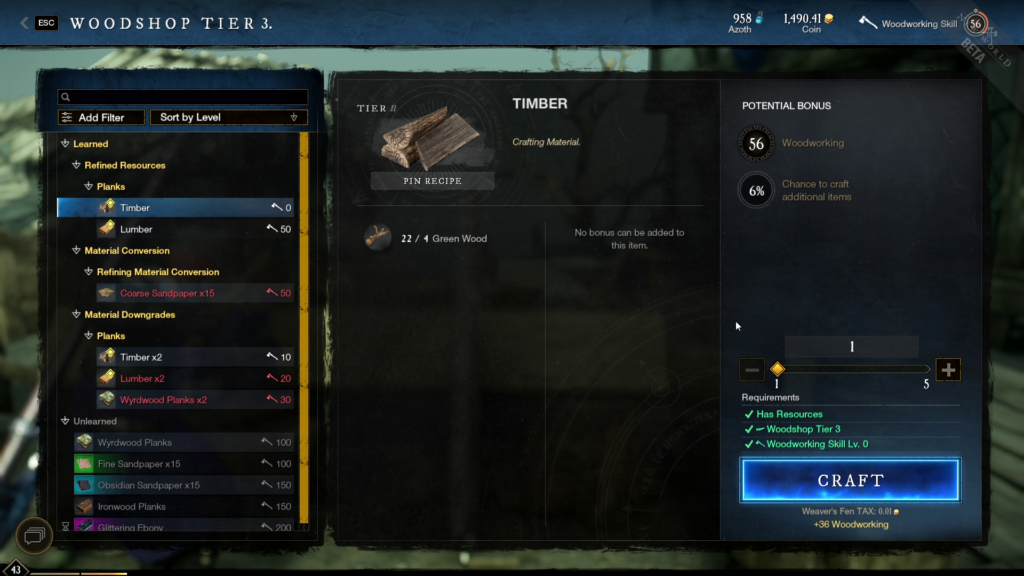 In between PvP activities and PvE stuff like Expeditions and questing, the most important feature and progression that New World players will want to tackle is the crafting and gathering system. There’s plenty of resources on the island ranging from wood, ore and leather to more complex ingredients like reagents and condiments used for cooking and alchemy, and the great thing about it is that everything you harvest, loot and pickup in the world has value and is significant. This allows you to spend your time crafting practical gear in towns to sell off at the localized trading post to make some coin, or use it for yourself. Either way, expect to get really busy in New World with all the crafting professions available at launch.

Only over a year ago, Amazon conceded that not adding some familiar PvE questing systems and mechanics would hamper the game for those not interested in PvP. As a result, the game now has plenty of quests in each territory that either tells a local story, besides the main quest chain that advances your progression. Unfortunately unlike the main story and expeditions, the PvE questing in New World is extremely dull. Most of the objectives are very repetitive, like trekking 5 minutes to a location, clicking 5 chests and running 5 minutes back to the quest giver for a paltry reward and XP gain. The problem is, majority of the side quests are structured like this with no variety, and the low XP reward doesn’t justify the travel time. Questing needs to be looked at if New World wants to keep a hold of the “casual MMO” crowd. 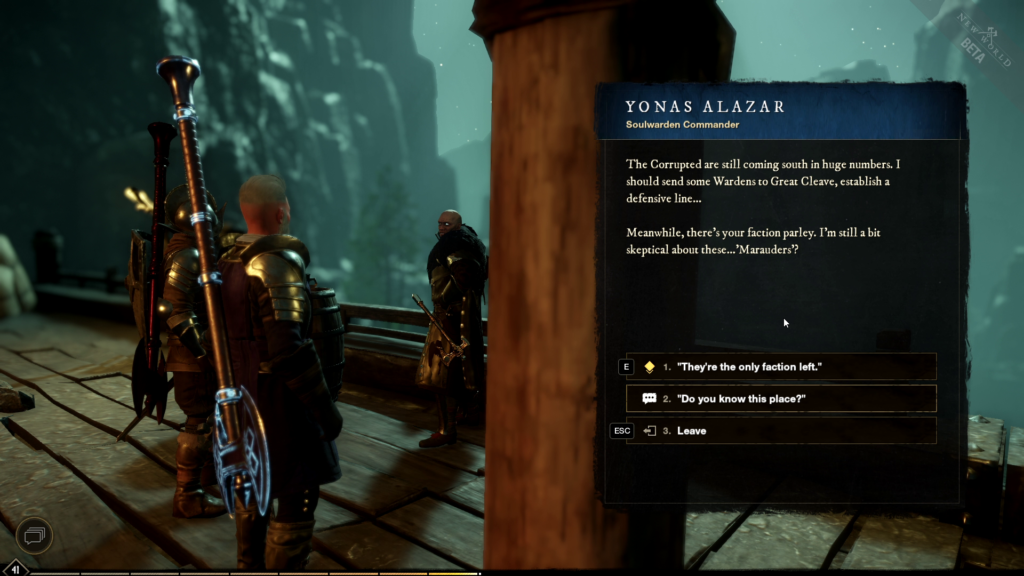 Currently in the closed beta, the highest content unlock level is 60, which opens up Outpost Rush for players. Normally you’d expect the main story quest chain to be sufficient to get you to the end-game, but this is not the case. XP rewards come from plenty of sources in New World, like discovering landmarks, crafting, kills and of course questing. The problem is, some methods are way more efficient than others, which leads players to abuse systems that shouldn’t work the way it does. For example, turning in Town Board crafting quests will offer a truck-ton more XP than any other quest or activity in-game, simply due to how quick it is. As a result, you’ll see plenty of players huddled around a settlement’s Town Board, waiting for new quests to pop up which they can immediately turn in and level up quicker. XP rewards elsewhere feels very low in comparison, especially in PvP where more players would definitely participate in if the rewards were better. 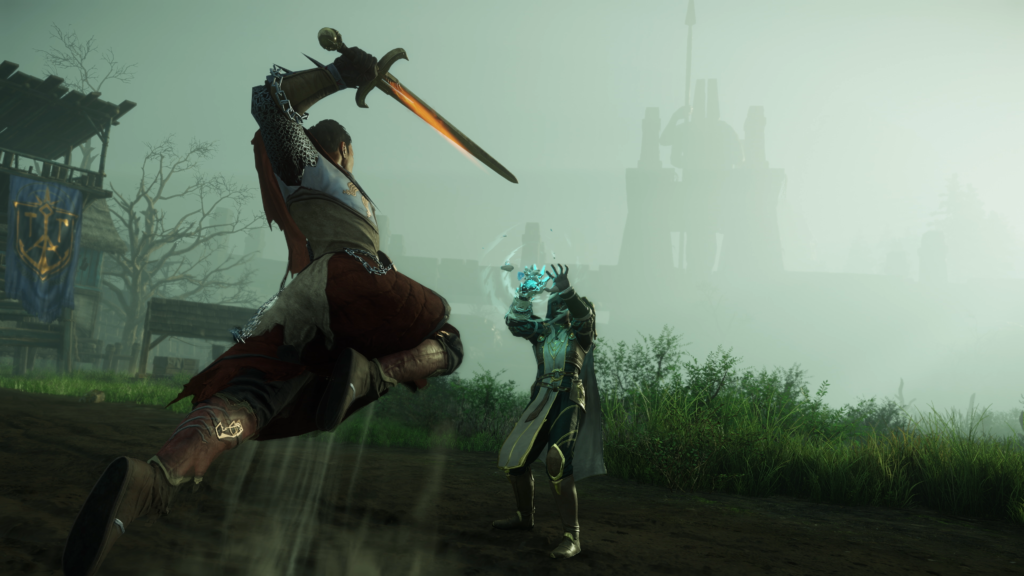 New World’s action combat has gone through one major change since 2020’s preview event, and that’s the removal of the stagger mechanic. Stagger for those that don’t know, means that players and opposing players have a chance to impair each other through expert timing and reactions, ensuring each combat encounter is exciting and gives you a real chance of succeeding even if you are lower leveled or are outnumbered. This has been completely removed due to complains of being “stunlocked”, which is fair. However, the current combat system just feels off. PvP now has become a left-click spam while waiting for weapon ability cool-downs, and in larger zerg fights it’s all about who has the most healers. PvE isn’t too bad because bosses will stagger you and you do have to break their immunity bars as well, so this issue doesn’t feel as bad in PvE as it does in PvP.