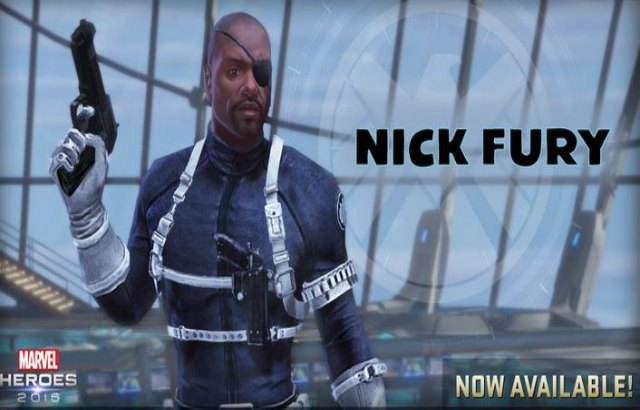 MCU favorite and the Director of S.H.I.E.L.D Nick Fury is the latest addition to the Marvel Heroes lineup. Nick Fury is the 62nd playable hero in the game, and players can acquire him in a Hero Pack.

When playing as Nick Fury, players have the option to call in Medusa as a team up option. Both of them pair up reasonably well and taking on monsters is pretty fun.

Players who purchase the Nick Fury Hero Pack will also get several items. There are two costumes available for Director Fury. The first is more accurate to the comic books – it’s a body suit with white strapping that loyal fans will recognize instantly. The second is a more formal version that is seen in the MCU movies.

Other items in the pack includes a Nick Fury Hero S.T.A.S.H which adds extra Hero specific inventory. There’s also 6 Fortune Cards and 2 XP boosters for a total cost of $17.99.

Fans of Nick Fury will finally be able to play their favorite character in Marvel Heroes 2016. Personally, I’m stoked that the full trio collection of Nick Fury, Maria Hill and Phil Coulson are now in-game. While it may be harder for new players to obtain Coulson since he is an event reward, he’s still there.

It’s also pretty impressive that Marvel Heroes are doing good on their word. More and more heroes from the Marvel Universe continue to appear in the game. We can’t wait to see who else is next. In the mean time, which Marvel Hero would you like to see added next? Let us know in the comments below!