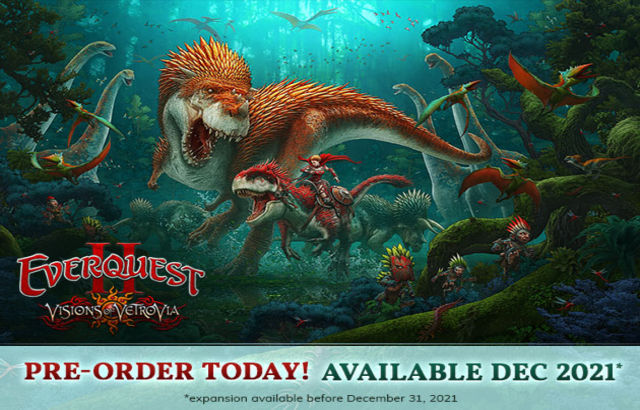 EverQuest II players can now pre-order the upcoming Visions of Vetrovia expansion, the game’s 18th expansion overall. Set to release in December 2021, everyone who pre-orders will be granted access to the beta.

Inspired by mystical visions, a crew of explorers, sailing the uncharted waters beyond the Shattered Seas, have found an isolated continent plagued by dark curses and discordant energies. Ruins of an ancient civilization are scattered across the landscape, while the imposing silhouette of an opulent castle rises from the highest point of the land for all to see. Whispers can be heard, in the native villages found along Vetrovia’s coast, of its supernatural master and the horrors it contains, but are any of them true? It’ll take Norrath’s exceptional adventurers and artisans to survive the primal terrors and arcane forces found in Vetrovia’s Svarni Expanse, Karuupa Jungle, and Mahngavi Wastes in order to breach the ramparts of Castle Vacrul and help cleanse the land, once and for all! But are we the only ones? Who else has had Visions of Vetrovia?

The expansion features a level increase to 125, new adventure, tradeskill and signature quests on top of all new solo, heroic and raid content to complete in the magical lands of Vetrovia.

For pricing and more information, check out the official site here.