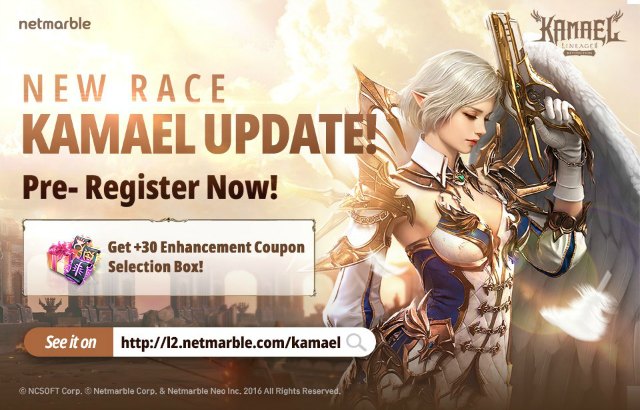 Starting today, players can pre-register for the new Lineage 2: Revolution update (https://l2.netmarble.com/kamael) to receive over 30 Enhance Scrolls once the update is available. More information about the update and scheduled rollout will be revealed at a later date via the pre-registration website.

The new Kamael race is the sixth race to appear in the game, following the addition of the Orc race in October last year. The update has multiple distinctive features compared to other races – Warriors of the Kamael race use Ancient Sword weapons, the Rogue uses Crossbow weapons and Mystic Kamael players have access to the Rapier weapon for close-combat attacks.

Upon completion of the update, players can also participate in various in-game events such as the Level-Up Boosting Event, as well as an event that gives out three full sets of Grade UR Equipment, the highest grade of its kind in the game.

Lineage 2: Revolution is a groundbreaking MMORPG bringing top-quality visuals, a massive open-world and large-scale PvP to mobile devices. Powered by the Unreal Engine, the game features stunning visuals and large-scale open-world combat where up to 200 players can battle in real-time on a single screen – all in a gorgeous, fully featured, persistent world MMORPG that can be enjoyed alongside millions around the world and all within the palm of your hands.