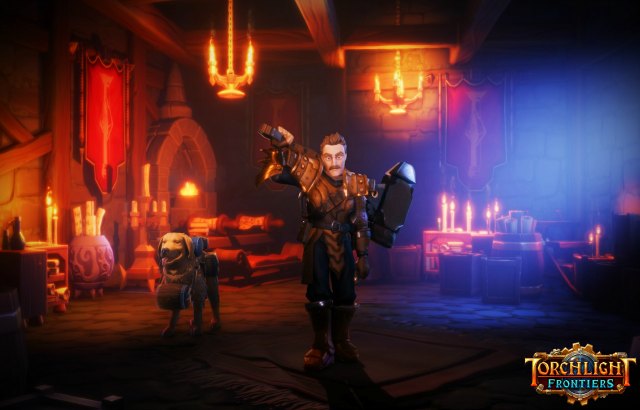 Perfect World Entertainment and Echtra Games are excited to unveil a brand new hero class for Torchlight Frontiers, the upcoming shared world ARPG set in the beloved Torchlight universe. Introducing the Railmaster – a locomotive savvy powerhouse who steams into combat with a massive hammer and heavily armed battle train. The debut of the newest hero class in Torchlight Frontiers marks the very first time that players will be able to assume the role of a Railmaster in a Torchlight game (Fans may remember meeting Captain Jacobi in Torchlight II, when the Imperial Railmaster provided passage between adventuring areas).

Now players can experience the power of the Railmaster for themselves, as they learn to swing a colossal hammer and strategically lay track for the artillery train that follows them through the Frontiers. Those who wield the power of the Railmaster can also customize each of the train’s platforms with different features to maximize firepower against oncoming enemies.

The Railmaster is all about swinging a big hammer and laying tracks for their train companion. You can mix it up in melee, bring the full power of your train to bear, or anything in between. With the various options for your train, there’s a really strong feeling of utility when it comes to the playstyle of the Railmaster. You’ll steam through enemies once you’ve found the build that speaks to you.

The Railmaster will be available to those participating in Closed Alpha for Torchlight Frontiers on April 23 and later to players worldwide when the game officially launches on PC, Xbox One and PlayStation®4. Torchlight fans can sign up for a chance to be invited to the ongoing closed alpha by visitingPlayTorchlight.com.