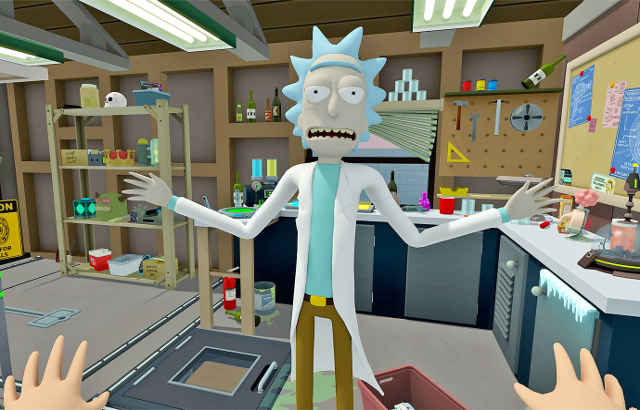 Great News Rick and Morty fans. The popular series is about to expand to virtual reality with a game called Rick And Morty: Virtual Rick-ality. Adult Swim and Owlchemy Labs have joined forces in order to create this wacky game. Owlchemy Labs are the creators of Job Simulator, one of the most surprising VR games of 2016. Check out the trailer below to understand what Job Simulator is all about:

As you can see in the trailer, Job Simulator is a crazy game. Therefore, i’m not surprised why Adult Swim have collaborated with Owlchemy Labs in order to create the right game for Rick and Morty. This isn’t the first Rick and Morty game, but it’s going to be the first virtual reality game of the popular series. The game is suitable for Oculus Rift and HTC Vive and it seems like a lot of elements from Job Simulator are implemented in the game.

The plot of the game is very appealing. You play a Morty clone and you have to follow the missions that Rick is giving away. For instance, you will have to explore the Smith residence in order to find and manipulate objects. It’s no coincidence that the game will launch on 20th of April as this day is very important for the Rick And Morty Franchise. According to a press release, Virtual Rick-ality is a “Fast paced, Chaotic VR Adventure” that features “Mechanics and Mayhem only possible in VR”.

Justin Roiland, the Co-Creator has expressed his high hopes from the VR Channel and on top of Virtual Rick-ality he has produced another VR title called Accounting. While Accounting was a free game, Virtual Rick-ality will sell for $29.99. Therefore, I recommend to you to celebrate April 2oth with this crazy VR game