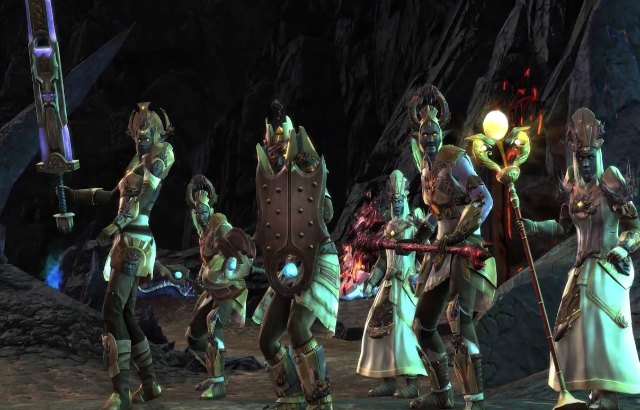 Trion World’s first MMORPG Rift is getting some serious new content for end-game players today. The Forged In Flame Update has dropped, and the patch is now live.

Players jumping in will find a bunch of new level 70 content. The most exciting of which is a new 10-man raid, the Tantaric Depths. The new raid will offer new players at cap and veterans a serious challenge for shiny new loot. Players will venture deep into the prison created by the Alaviax to imprison the dragons of the Red Flight.

Raid groups will have to go forth to stop Queen Carli’s plan to bring forth the Apocalypse. It may sound daunting, but the raid intends to be accessible to new raiders, while maintaining relevant rewards for veterans.

The update also introduces more Eternal items. These can be obtained via a series of new level 70 quests, the new Rise of the Phoenix quest and the reworked level 70 Intrepid Gyel Fortress.

On top of the new content, new player tools are also making its way into the game. Rift now has a brand new Looking for Raid tool. According to the patch notes, the LFR tool will now make it easier to find raid groups and works just like the Looking for Group tool.

Looking for Raid(LFR): Similar to Looking for Group in dungeons, the Looking for Riad system gives players the opportunity to quickly and easily join up with others and take down epic bosses. Players are rewarded individually through the individual rewards system.

This is a pretty great update for Rift players looking for new end-game content. For more information on the Forged In Flame update, check out the patch notes here.