Shroud of the Avatar is one of those Kickstarter MMORPGs that started with an idea. The promise that a fantasy world exists in parallel with ours, where adventures are found and legends are forged. Created by the legendary Lord British, Richard Garriot is the grandfather of sandbox RPG games. When you think of Ultima, he’s the man responsible. SotA is currently in early access, and its had close to four years of development time. Besides that, the game has also raked in close to $11,000,000 in funding.

Is Shroud of the Avatar worth the buy in however? Players who back the game are promised episodic content, strategic combat and a huge sandbox world. Players are given loads of freedom to build towns, cities and houses. But is this MMORPG all that it says it is? The game recently had a free trial period where I dove in to see these promises for myself. Here are three takeaways from my experience. 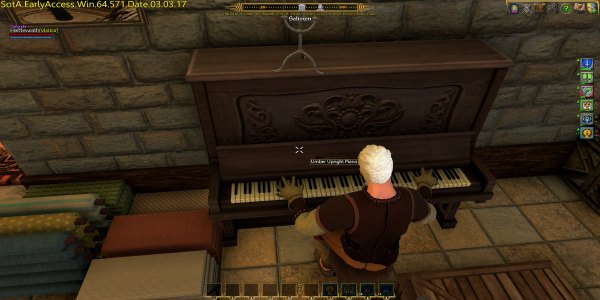 The world of SoTA is undeniably vast. New Brittania is a fantasy world where NPCs have a lot to say and towns feel alive. There are no traditional quest hub crawls and hand holding here. Players are forced to explore and uncover adventures by themselves. When not on adventures, towns and social spaces are in my opinion, the main attraction of this MMO. Every town has plots that players can buy either through one of the pledge bundles or through in-game vendors.

You can build buildings, houses, stores and many more on these plots. The fun part is you can decorate them too, with a slew of interact able items. Placing a piano in your house for example, allows you to use the game’s music system. In similar fashion to The Lord of the Rings Online, you can even upload ABC files to synchronize and play songs with friends and guild mates.

Even broader than existing town slots is that there are entire towns within the world that are blank canvases, ready for player input. Entire guilds could just spend real cash to take over a town and start building whatever they want. This also affects the in-game economy. Players can choose from a dozen crafting professions to create items that they can put for sale. Vendors can also be bought to sell your crafted gear, earning you a nice cut, depending on where you put them. 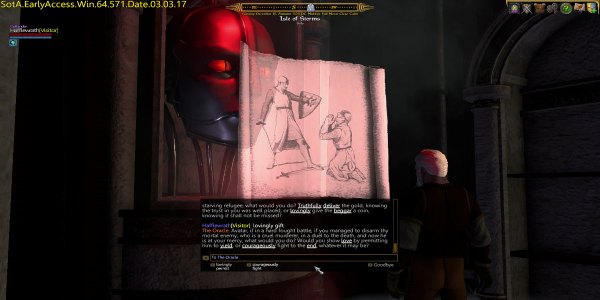 The whole sandbox thing is modern and cool, but beneath the surface, things are traditional. SoTA pays serious homage to the olden and golden age of RPGs. You are not forced to play online all the time with other players. In fact, you can choose to play single player offline if you want to. Beyond that, in-game mechanics are also throwbacks to the older generation of games. There isn’t a map you can bring up by pressing M for example. Maps are items you toggle from your back pack. Navigation is primarily done through the compass on the UI too.

Dialogues with NPC quest givers are perhaps the best example. There are no voiced dialogues or flashy cut-scenes. The stories are relayed through old school dialogue boxes with texts and lots of reading. You can even type in responses or click on keywords to learn more. 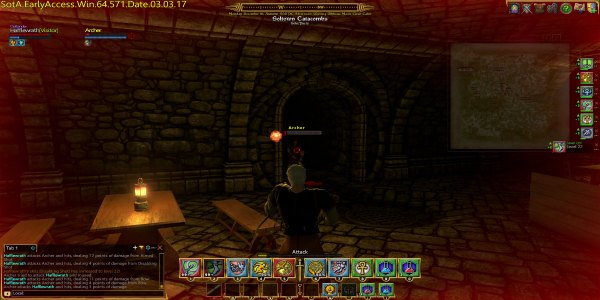 But The Combat & Animations…

Unfortunately, that’s where the fun stops for Shroud of the Avatar. When it comes to combat and animations, the game disappoints. Animations feels too stiff and it’s surprising to see it even exists in a modern day game. And the animations do not help the game’s horrendous execution of combat. Melee weapons feel awfully clunky when used, and ranged weapons are boring and uninspiring.

It’s too bad really, because combat progression is an interesting concept. Every time you use a skill, it gains experience through training that you can toggle on or off. The better the level of a trained skill, the more effective it is, or the longer the duration of a buff. This fits in well with the game’s classless system too, you can just about become whatever you want to be. But the combat is a nightmare and more often than not, players will find themselves avoiding combat encounters in favor of town-building or exploring.

Shroud of the Avatar is an MMORPG concoction born out of nostalgia and hope. Hope that we could re-introduce the magic of olden day RPGs in a modern way. The game has really interesting concepts and ideas that appeals to those of us who love being part of sandbox worlds to create. But when it comes to the core game play involving PVE and PVP, everything starts to fall apart.

Sure, its only in early access but having had so much time to develop, the results just don’t add up. And with a $40 buy in, this is one old school adventure I will not be going on again.

As the leaves change and we leave summer behind, Sea of Thieves also enters a new Season with the arrival of

Gamigo has announced that Patch 35 is now available to play for all Grand Fantasia players. This patch introduces