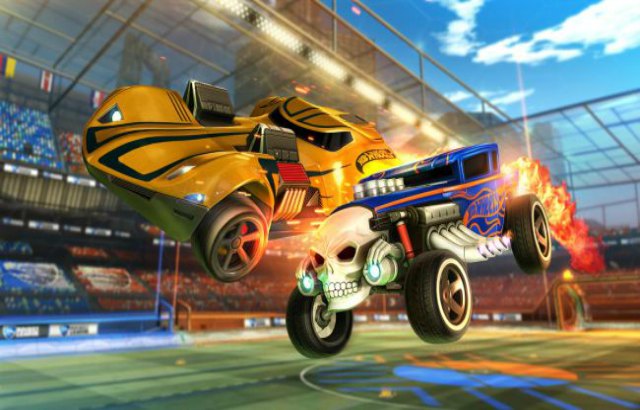 Rocket League has been tearing up the gaming world for some time now. It’s probably the most played car-based PVP game on Steam currently and for good reason.

There’s more good news however, as developers Psyonix has announced that the game is going to get a new DLC, featuring a new line of cars. Of course, it just had to be Hot Wheels. There will be two premium Hot Wheels DLC packs coming this month, and on the 21st of February players can check out the Twin Mill III and the Bone Shaker.

The two cars will cost approximately $1.99 each which is decently priced. The real good news is that for players who don’t want to buy the DLC, they will be rewarded too.

Free players will also get two four free cars. They are the Antenna, Trooper, Shark Bite Trooper and the Treasure Hunt Flag. It’s definitely a nice touch that everyone gets something from the new update.

In all fairness, players really can’t complain about this. Rocket League is fun to play, and has a good price point and MMO model too. So for the price of the DLC, it’s not something to rage about considering it is after all, the addition of big name brand such as Hot Wheels.

How will the new cars compare to the base versions? According to play testers and YouTubers, the cars won’t have too significant of an advantage. This will keep the soccer-racing matches balanced and to me at least, that’s the most important thing.

Overall, the Hot Wheels update sounds like a lot of fun and we can’t wait to jump in and soak in the smell of a fresh car. What do you think of the new Hot Wheels update? What other cars would you like to see? Let us know!