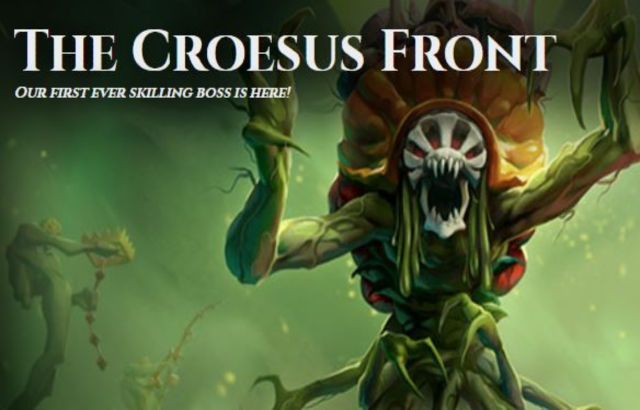 Players will not wield combat skills to defeat Croesus but will battle with their mining, fishing, hunting, and woodcutting skills at specially placed nodes surrounding the fungus-like boss. As the battle is fought purely with skills it’s impossible for players to die; teams lose if they don’t deal enough damage during the battle. Players can fight in groups of up to 50 skillers and there are no skill requirements to face Croesus itself, although it is recommended having at least level 80 in gathering skills.

Defeating this botanical beast unlocks a tier 90 magic tank armour, a boss pet, a seed bag, a Rune Pouch upgrade, and the Bik God Book. Furthermore, two new skilling off-hands are also up for grabs. The Tagga’s Core Hammer is a level 80 Mining off-hand that speeds up the process of mining minerals when equipped, the other is Sana’s Frytorch which is used for Woodcutting.

The Croesus Front is now live in RuneScapeon PC, Steam, iOS, and Android, complete with cross-platform progression and play across all platforms. You can check out the trailer for The Croesus Front here: https://youtu.be/hG5-l3XyAQE.