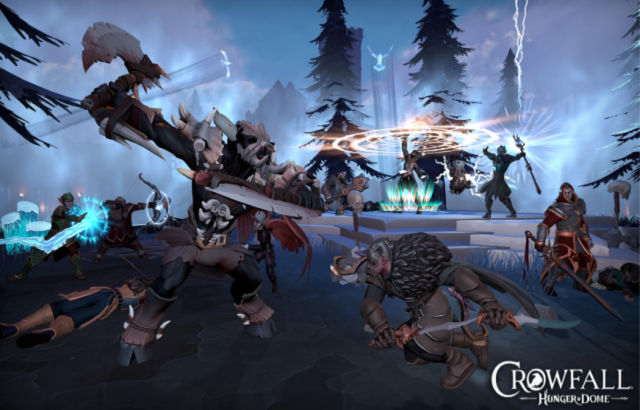 ArtCraft Entertainment has announced its highly anticipated Throne War PvP game, Crowfall™, will launch commercially on July 6 and can be purchased from the website, Crowfall.com.

An innovative new approach to MMO design, Crowfall breaks from the tradition of locking characters into a static, never-changing “realm” or “server,” allowing players to move freely between worlds, with each world offering a unique experience—different maps, different politics and different rules. These diverse worlds include The Dregs (massive Throne War campaign with forts, keeps and castles that support 100v100 sieges), God’s Reach (perpetual 3-faction battleground servers), the HungerDome™ (a 12 team, 60 player battle arena) and the Eternal Kingdoms (player-built worlds that offer guilds and monarchs the ability to terraform the terrain and construct spawning cities and massive strongholds).

Across all of the worlds in Crowfall, one key factor differentiates Crowfall: player agency.  Crowfall is a dynamic universe, where players control the direction of the game: cities will rise, castles will fall. Recruit an army and lay siege to your enemies. Hire an assassin to turn the tide of a campaign.  Form a band of mercenaries to raid your neighbor’s stronghold. The fate of the Dying Worlds will be determined by player decisions, choices that will reshape the battle and change the shape of this world, forever.

“Crowfall is such a unique project in so many ways,” explained J. Todd Coleman, creative director and co-founder of ArtCraft. “We set out to create a game for players who are looking for a more visceral, immersive experience. A game where the player’s world is not bounded by canned stories or scripted events. We are proud of, and humbled by, the level of passion and energy we have received from our community from the beginning. That support, that belief in what we are building, has been the critical piece in making Crowfall a reality.”

In advance of launch, ArtCraft is releasing a new animatic video, Eternal Heroes, Dying Worlds, produced in partnership with Powerhouse Animation Studios. The video introduces the origin of the Dying Worlds and the emergence of the Crows, divine champions who fight to earn glory, wealth and power in the name of the gods. To watch the new animatic video, click here.  To download, please link here.

If you are ready to join the battle, visit Crowfall.com now to join the Beta. Register an account and gain immediate access to play now.