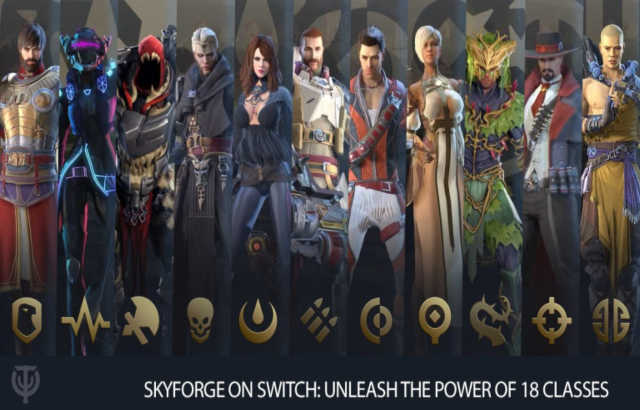 Global publisher MY.GAMES and developer Allods Team proudly reveal exciting new details for their upcoming free-to-play sci-fi MMO Skyforge ahead of its Nintendo Switch release on Feb. 4, 2021! In addition to an explosive new trailer giving gamers a first look at the awesome power of the nature-based mage Grovewalker class, details on three new pre-order bundles has been released for players interested in getting a headstart on their cosmic journey to defend the planet Aelion!

The new gameplay video features a first look at the raw mythical power of the Grovewalker class on the Nintendo Switch, as it battles its way through swarms of combat Mechanoids in the robotic domain of Factory 501. Grovewalkers are highly proficient mages that sling wild, natural magic at their foes from afar. Although they have a deceptively nimble appearance, they can call upon the protection of their living armor to morph into hulking frontline tanks!

Skyforge will be available to download for free from Nintendo eShop (a Nintendo Switch Online subscription is not required for online play). Future content updates, including the release of the first Invasion, will also be available for free.

MMO fans interested in getting a headstart on the action can begin their journey two days early on February 2nd  by purchasing any of Skyforge’s three unique Founder bundles, now available in the Nintendo eShop! These special bundles are loaded with a divine array of useful and exclusive in-game content, including cosmetics, legendary weapons, and class unlocks. The Deluxe and Ultimate Bundles also contain the Callsign NX Wings, a cosmetic item only available in Skyforge for Nintendo Switch featuring a color scheme inspired by Neon Red and Blue Joy-Cons!

Full details on the various Nintendo eShop bundles can be found below: