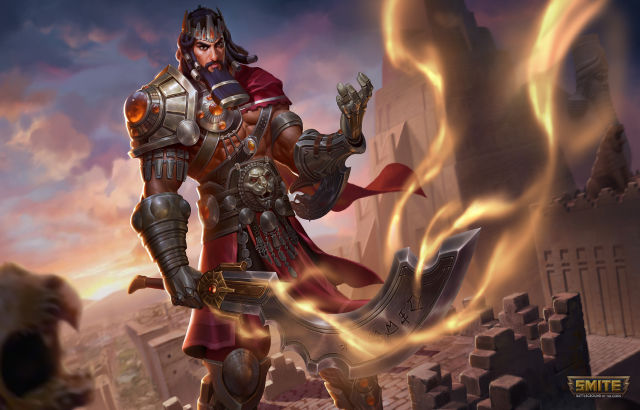 Today, Titan Forge Games released SMITE’s newest playable God, Gilgamesh, in the “King of Uruk” Update. He has been eagerly awaited by the action-MOBA community since his cinematic trailer released in March.

Gilgamesh is a leader, an adventurer, and the first mythical hero of all time through his epic. In SMITE, he distinctively belongs to the Warrior class, taking a hands-on approach to combat and bringing a lot of brute-force strength and an in-your-face attitude.

“The entire Titan Forge team strives to increase the polish level of every God we release,” says Alli Schatzer, Senior Animator for SMITE. “With Gilgamesh, the Animation team pushed to accomplish this by experimenting with new approaches to attack animations, improved camera movement, and more. A close collaboration between departments resulted in responsive, fluid, and just plain fun gameplay that I cannot wait for players to experience. In SMITE’s roster of over one hundred playable characters, I believe the Titan Forge team made Gilgamesh unforgettable.”

With both a spectacular Drop Kick and a powerful leap, Gilgamesh has a ‘king of the ring’ feel to him. Adding to it, his ultimate ability calls upon a circular windstorm trapping enemies inside.

High above, the skies have taken a darker, stormy hue. On the ground, destructible vines now sprout up in the Jungle, creating strategic opportunities.