The Elder Scrolls Online 2018: What We Expect From The Murkmire DLC

The Elder Scrolls Online 2018: What We Expect From The Murkmire DLC 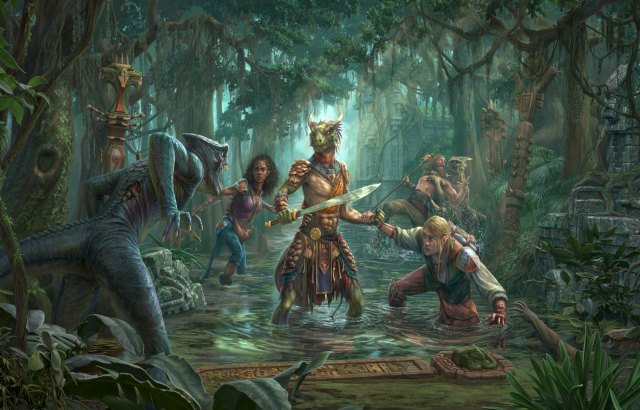 Elder Scrolls Online’s Murkmire DLC is right around the corner, and we’re sharing what we are looking forward to come launch! And just as a reminder, you can start the prologue quests for Murkmire right now. Additionally, the DLC will be free in November for all players. Simply log in and claim your daily reward for 24 days total in order to get the Murkmire DLC for free.

Murkmire is uncharted territory for the game at this point, and what does that mean for story? It means the studio has the freedom to show us things we have never seen/heard before, and show us what we didn’t know we want. So far, the prologue quests has been fun. The Indiana Jones style scavenger hunt for the Golden cursed Skull was a nice little snippet of what to expect. And there’s plenty more to come, in the form of new characters, exciting plot and all the while, giving players more content like dungeons, delves and other things to do. Can Murkmire top the Summerset and Morrowind Chapters for story?

We’re putting huge expectations on ESO’s shoulders here, because at this stage of the game’s life cycle, we know they can. Having seen the base game stories evolve through the DLC’s and Chapters, the quality of writing, voice acting and other narrative elements have improved so much. The only way forward for ESO is to top their previous content, which is never easy. But it can also go backward, which will be unacceptable to many players at this point.

What do we mean by substantial content? Think of content that’s worth doing, months or maybe even a year after release – either because it’s that fun, good or rewarding for players to do. In some ways, those who’ve been on the PTR have said new content like the Blackrose Prison where players face waves on enemies for fortune and treasure could be it. It’s something new for Elder Scrolls Online, but one instance just won’t cut it. Murkmire may be a DLC, but why let that stop players from expecting expansion quality content? We know that so far, there’s going to be a meaty new story quest arc, more landscape content in the form of Delves and Dungeons, and the Blackrose Prison. On paper that sounds good, so it’s now up to the players to decide if it’s better than what’s come before it or not.

On the bright side, this is the first time that Elder Scrolls Online is actually offering the Murkmire DLC free to all players, for just logging in for a total of 24 days in November to claim daily rewards. That’s bold and definitely nice, but is there a hidden reason for that?

It’s been a while since ESO offered players something to be excited about when it comes to classes. One year has passed since Morrowind when the Warden class was introduced, and now players are back to the usual classes for choice. When that happens, the focus (as it’s always been really) is firmly back on the classes and their effectiveness, especially when a new update is on the horizon. We know from the PTR that some classes are apparently getting the short end of the stick. Stamina Sorcerers are not happy with where things are going, but the other classes also have their issues. Here’s to hoping that Murkmire and the DLC’s cycle in the next few months will look into the performances of each class and tweak them accordingly.