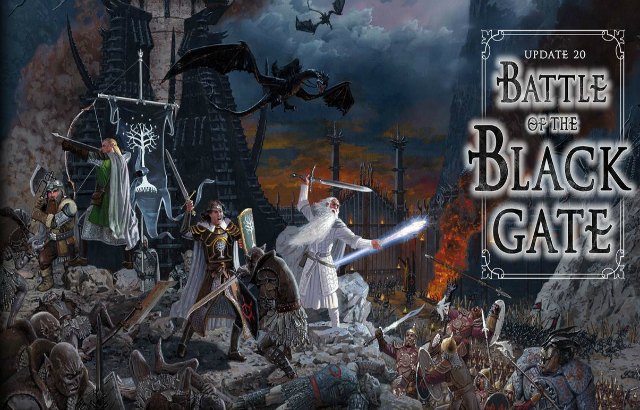 The Lord of the Rings Online’s latest update is here and live. Called Update 20: Battle of the Black Gate, Lotro’s latest Quest Pack brings players closer to the doorstep of Mordor. After ten years of Epic Story content, we are finally getting to the climax and the big confrontation between Sauron and the Free Peoples of Middle Earth beckons.

The new update will be free for all VIP subscribers. Premium and free to play players can purchase the Quest Pack from the in-game Lotro store. There’s over ninety new quests in the update, which spreads out over three new areas. They are the Noman-lands, Dagorlad and the Slag-hills, which makes up The Wastes region.

As far as main story content goes, players can now continue their journey into Mordor with Aragorn. Epic Volume IV, Book 8 is now available and players pick up the quest from Aragorn at the Camp of the Host in North Ithilien. The new Epics promises lots of tie-in to the original events in the book so expect to see plenty of Session Plays that tells the stories of other members of the original Fellowship of the Ring.

However, don’t expect to see new dungeon and instances content any time soon. Update 20 introduces some PVE activity when players have finished the zone. The first is a couple of new resource dungeons. Players can run these daily to accumulate supplies, which can be bartered with NPCs in the new zone for rewards. Supplies can also be acquired through crafting when players get the new crafting recipes.

Finally, there’s new landscape content to take on as well. There are new Roving Threats in the new zone to challenge either solo or grouped.