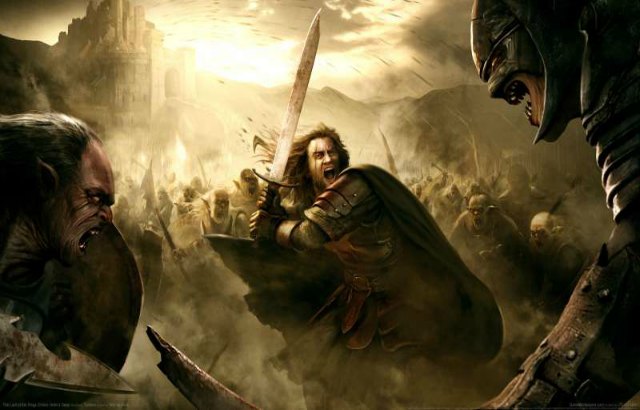 With LOTRO launching its first ever fresh start progression server tomorrow, we’ve got a some plugins and addons to suggest which will help you in your journey through the Anor legendary server. Check em out!

The first LOTRO plug in that I highly recommend is buff bars. The plugin comes with two UI elements, the buff bar counter and the buff sliders which you can see at the bottom right of the screen. The bars basically shows you what buffs or debuffs are on you at a glance, along with the timer to indicate how long it’s been on you or how soon it will disappear. The sliders are just for visual que which is handy in PVP, Raids and even landscapes just for you to know when’s the best time to pop a skill or a pot.

And speaking of potions, the plugin can also be customized to show the relevant potion when under a certain effect, which is great as you won’t have to use up space on your skill bars for potions, or manually open your bags to consume one.

Titan Bar is a small but handy plug in to have.It’s the thin bar that you see at the very top of the screen. It’s incredibly convenient as it can show you all the information you need at a glance. It can tell you what the real time is, what the in-game time of day is and how long till it turns, and you can set it to show your currency, skirmish marks, medallions and so much more.

Probably the best feature about titan bars is the ability to take a look at what’s in not only your own vault and bags, but in your alt’s vaults and bags too. It comes with a search feature so looking up crafting mats or other items becomes very easy indeed.

For those of you playing classes that can travel and port around like LOTRO’s Hunters and Wardens, this is a must. Travel Window will also be handy for players with several Milestone skills bound to important travel locations. It creates a single window that contains all the available travel skills, including the race, class and reputation skills. It’s extremely convenient so you no longer have to open your Skills page and look for them, or waste valuable hotbar skill slots to slot them. 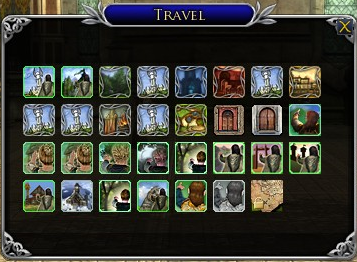 The next plug in is called Palantir, and it’s the oval health and power bars that you see in the middle of the screen between my character which I set to appear only during combat. Palantir is another one of those plugins that I can’t play without these days, as it’s such a useful indicator that shows my health quickly without having to move my eyes all the way to the top left where my character portrait is located, which is the default location for your health and power bars. This can be a chore especially if you game on a large monitor and can’t afford to glance during the heat of a critical battle in PvMP or in a raid boss fight. You can change the colors of the bars, set it’s opacity so it doesn’t interfere with immersion and just like buffbars, you can also set it to proc the appropriate potion when you’re under a certain dispellable affect. 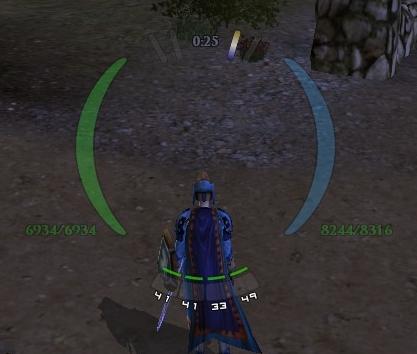