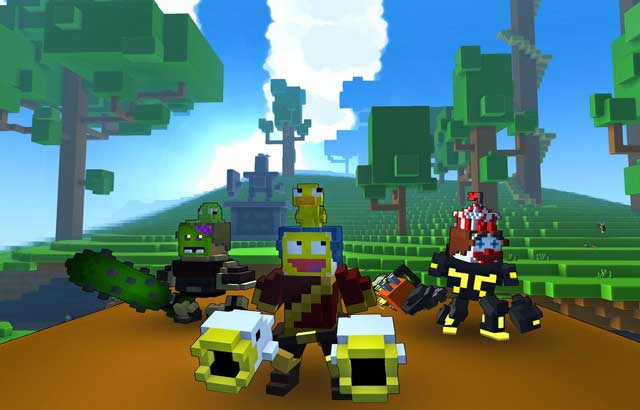 Mixing Minecraft with open-world features, millions of player interacting and making a fantasy RPG vibes come to life. TROVE is one the unique MMOS that does not feature compelling stories, insane 3D next-gen realistic graphics and such. Rather, it focuses on cooperation with other players in building the world, ridding of monsters and most of all, enjoying the art style. Get lost in the world and explore places that even some players have yet to venture in.

TROVE consist of many classes, each unique to its own and not a rehash at all. In fact, it is one of the most interesting classes by far. I would personally say that this game not only features beautiful cube-world but also the best class options so far. Though the game does not allow all characters to be played free, I would pay anytime, any day to play them all. Below are the classes as mentioned:

Knight: Your standard tough-boy, hacking and slashing his way in dungeons and showing off his brand of justice to all who dare defy him.

Gunslinger: A cowboy with sci-fi guns much of a steampunk vibe. Jump and shoot mid-air and blast your enemies to smithereens. Also, he has a sick moustache.

Fae Trickster: A fairy illusionist, pretty but cunning is her own way. Just a typical prankster with creating clones, planting explosive disco balls around your enemies.

Dracolyte: The mage, releasing all his dragonic powers imbued within him. It is best not to ask his past. Did I mention he also has a pixelated pet Dragon as a companion? That is pretty cute

Neon ninja: Imagine a ninja, with lightsabers for his blades. Live out your Naruto fantasies with this bad boy character and stab enemies with neon blades from the dark.

Candy Barbarian: Nothing better than a sugar-rush while you’re in combat. Just beat the living crap out of the monsters with your ice cream cones, lollipops and what sugary confectioneries you have at your disposal.

Ice sage: Literally, the dullest but visually stunning class. Be the Elsa you were meant to be and let it go!

Shadow Hunter: Walk and shoot through walls. Pin point your enemies location and snipe them from the furthest distance possible. All within the grasp of your bow and strategic positioning.

Pirate Captain: Love cannons so much, you just equip them as an ordinary firearm. Blast your opponents away and stick a dynamite or two onto them

Boomeranger: Whether it’s a bow, blade or bomb, remember that it always comes back to you. Don’t die by your own hands, that is pretty embarrassing.

Tomb Raiser: A summoner class where you perform devious rituals calling upon the undead and that which should not be mentioned. Create a horde of skeleton armies or a monstrous golem to fight for you. A king does not need to step down and fight lowly peasants.

Lunar Lancer: What’s cooler than a spear-fighter? A foxy spear fighter that calls upon the powers of the moon the bless his weapon with moonlike divinity.

The Revenant: Not your ordinary chubby lovable tank, but easily a Hulk in necessary occasion.

Chloromancer: Before you realize it, you had fallen for her beauty and colour display of nature itself. Healing friends and providing buffs while simultaneously gripping hard onto her victims viciously.

Dino Tamer: A prehistoric man and his partner-in-crime dinosaur come to life. Set ablaze your path and wreak havoc to those who harm you and your friends.

TROVE is not just a game, it’s the game to play and the place to be.

Go forth into dungeons; from sky high palaces to horrific castles that would send shivers down your spines. Pyramids, spooky caverns and swampy horrors, live out your fantasy life. Collect gears that no one else has, kill and survive the deadly beast to share your great triumphs and more. As far as I can tell, dungeons are the best place to be in this game; whether is solo or party.

Lairs are also a reoccurrence. They are a miniature version of dungeons focusing more on getting fast gears and rewards. If you’re busy and want to have a small skirmish on your own or with friends, dive into the lair of beasts and live to tell the tale.

Roleplaying and niche in production

The game also feature cornerstone, areas where you may build your houses. Mow your lawn, set up a barbeque pit and sing a campfire song. Invite your friends over and throw the sickest rave party of your lifetime.

Meanwhile, you can also create club worlds. You, your friends, family and acquaintances can have access to an empty world waiting for potential builder to shape it. Depending on the outcome, the world may be released for all officially to explore and as a new content to be excited about.

TROVE is not just a game, it’s the game to play and the place to be.

Honestly, there is not much to say about this game. Well there is a lot of negativity and hate that I have spent hours clicking and watching my character do all the work. But seriously, nothing good has come out of this game and my advice is to avoid it. But hey, if you’re into this kind of games, this is just my opinion. Have fun, cheers!