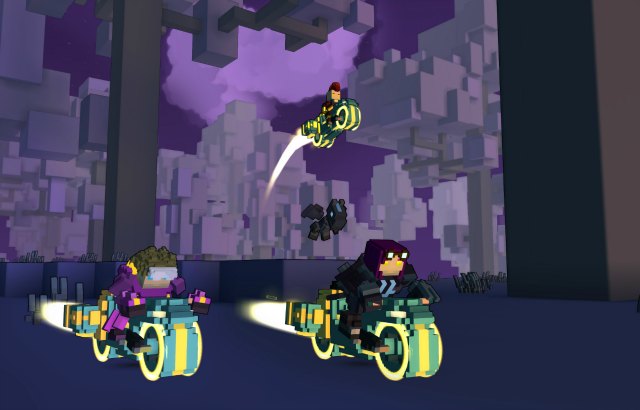 Mark your calendars, Trovians, because Trove – Heroes, the next update for the voxel MMO Trove, launches on March 27. Experience an action-packed expansion heavily inspired by the silver age of comic books!

In Trove – Heroes, players will fight to save the high-tech neon city of Luminopolis, which is under attack from a nefarious group of robots known as the Amperium. Be the hero as you team up with a rebel group called the Resistors, who are fighting to restore light back to the city. In Trove – Heroes, players will partake in new adventures and meet new NPCs, all while fighting off the threat of Mega World Bosses, and other major attacking forces.

Players will have access to an all-new expert class, the Vanguardian, who utilizes melee and effective ranged attacks to defeat their foes. The heroic Vanguardian is the ultimate symbol of virtue, so employ their powers to restore order and peace to the fair city of Luminopolis!

The Amperion won’t be the only threat players will face in Trove – Heroes. Through the new beacon system, players can gather to test their mettle against enormous enemies summoned to fight them. Additionally, a new type of challenge called Rampages will have you and hordes of other Trovians in Luminopolis facing off against gigantic invading monsters. Prove your worth and score some awesome loot for your effort!