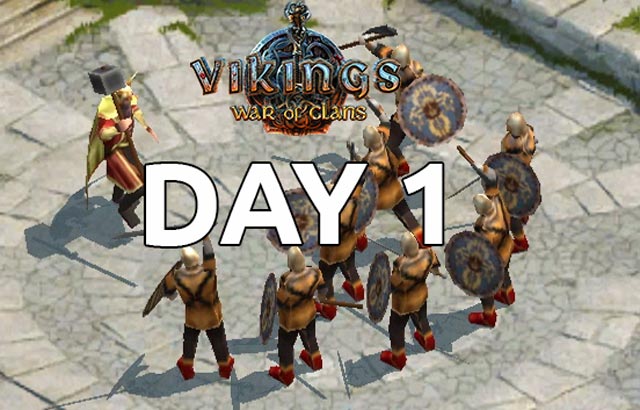 If you’re playing Vikings: War of Clans, well be sure that to be excited for the beta on PC is now available. Now coming with many new features, gameplay and art style. Available cross-platforms on your computer, phones and tablets. Here is my 5 day journey in playing this game.

“You start off the game with a beautiful maiden”

You start off Vikings: war of clans with a beautiful maiden, of course. She greets you giving you a ton of instructions but don’t worry, as they are really straightforward and easy to follow. One thing I learned from games like this is, focus on building your resources. After completing the initial quest, start spamming your buttons on all the resources. Lumber, Iron, Stone and Farm. Then upgrade them all to 2. You can now build the various offensive buildings such as the Barracks, Manor and Infirmary. Best part about being in the Beta test, you get to upgrade your cities much faster for FREE. That’s right, developers are giving out perks as to boost your construction within mere seconds. Get to see your city flourish quickly, and take up the ranks real fast.

Pick and choose which aspect or troops you’d like and send them out to battle. Pressing the global map, in the middle of the bottom sends you outside. Giving you a ton of vision about your enemies and surrounding camps. Make sure to always send you troops to raid and gain more resources. They also give you lots of perks such as influence, which is important in the late stages of the game.  Of course, PVP is also a fun aspect in this as you dominate the ranks and beat your opponents to a pulp. But know that you cannot win this game alone, form or join an alliance. It’s always fun to interact and play in groups, while protecting one another from any harm.

“On the first day, try to fill up all the grounds and boost all buildings to level 2”

On the first day, try to fill up all the grounds and boost all buildings to level 2. That includes the Oracle which is essential for the card-like feature in the game which is actually skills. Skills are not limited to battle, as they also help with resources, construction and various other features. Thus, eliminating the overuse of RPG-like feature. Speaking of that, you also get a hero, how cool is that? Your hero has his or her own skill tree, prompting greater battle and MMORPG-like scenarios. Plus, you get to craft whatever Armour you’d like for your hero or troops through the Forge.

Best part is, the beta test provides you with a one-day-only VIP trial. You get to enjoy various perks and see other features you would like to on the very first day. Make sure to not only do quest, but the task system that offers a whole lot more. Task are quest-like features but they can be done over time giving you great rewards and experience points. Guess what, 10 minutes and I am level 5 already!