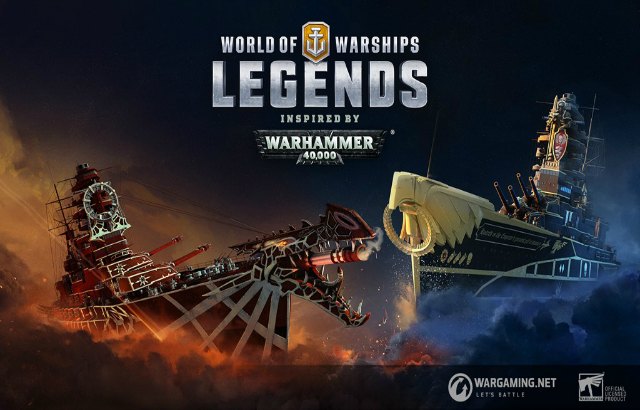 Wargaming is bringing the gothic splendor of Warhammer 40,000 to World of Warships. Players can choose between different bundles containing themed ship skins, commanders with unique voiceovers, camouflages and flags from two of the biggest factions in the Warhammer 40,000 universe — Imperium of Man, a galaxy-spanning interstellar human empire; and Chaos, those devoted to serving the Chaos Gods.

On June 22, Warhammer 40,000 inspired bundles will also be coming to World of Warships: Legends available on Xbox and PS4.

Watch these videos to see what players can expect with this epic collaboration on both World and Warships (PC) and World of Warships: Legends.

Imperium of Man and Chaos will be represented through unique and dreadful ships helmed by their fearless commanders: Justinian Lyons XIII and Arthas Roqthar the Cold.

“As a Warhammer 40,000 fan myself, I’m very excited to finally see these epic themed ships in our ports. Their striking visual appearance paired with the dramatic voiceovers that will give you chills, promises to evoke the grim dystopian splendor of 40K. I have no doubts our players will enjoy playing these ships as much as we did while designing them, said Philip Molodkovets, World of Warships’ Executive Producer.  “After our extremely successful previous collaborations with World of Tanks: Blitz and World of Tanks we’re thrilled to work with Wargaming again. We’re big fans of World of Warships, and we can’t wait to see players celebrating Warhammer 40,000 in their games with these beautiful and authentic themes.” said Jon Gillard, Global Head of Licensing at Games Workshop.

World of Warships has had great success bringing various collaborations to life in its game without hurting the historical aspect or distracting players who prefer the standard gameplay.  Providing a flexible system of filters, players can choose to customize their visual experience or, if they are not interested, turn it off completely. The collaboration with Games Workshop celebrates the unique visual style of their universe, but does not alter the gameplay.