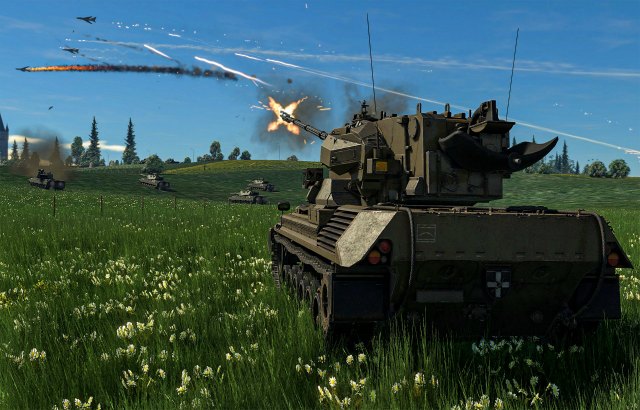 Gaijin Entertainment announces the start of “Road to the West”, the 3rd season of World War mode in the military online action game War Thunder. This event will run until July 20th and allows players to recreate the “Battle for the Chine Farm” (part of the Yom Kippur war between Israel and the Arab nations) and the “Battle for the Fulda gap” (USSR vs. Germany) with rare versions of a Soviet Il-2 attack plane and the US M60 tank as rewards. While the start conditions in each scenario are predefined, the flow and result of battles are decided only by the players.

The M60 AMBT is a M60 modernization variant developed by the Turkish company StandartBio in 2011. The program named as the Affordable Main Battle Tank (AMBT) was aimed to increase the combat effectiveness of M60 tanks to a level roughly equivalent to modern main battle tanks by installing a gun from the M1A1, an electric turret drive and a better engine.

The Il-2 (M-82)  is a rare version of the famous Soviet attack plane developed in the summer of 1941. The Soviets thought that the rapid advance of the German troops could disrupt the production of the AM-38 engine and hastily designed a variant that would use the M-82 engine. The prototype was also the first Il-2 variant featuring a much anticipated defensive turret with a position for an air gunner, the need for which became evident after the first IL-2 sorties in WWII.

The 3rd season of  World War features helicopter armies for the first time. The commander that controls them on the strategic map may use these forces for air support of ground troops or to drop infantry behind enemy lines. World War mode has also been made available to Xbox One players for the first time. Thanks to the cross-platform multiplayer support, they have a chance to play World War together with friends that use the PlayStation 4 or PC.