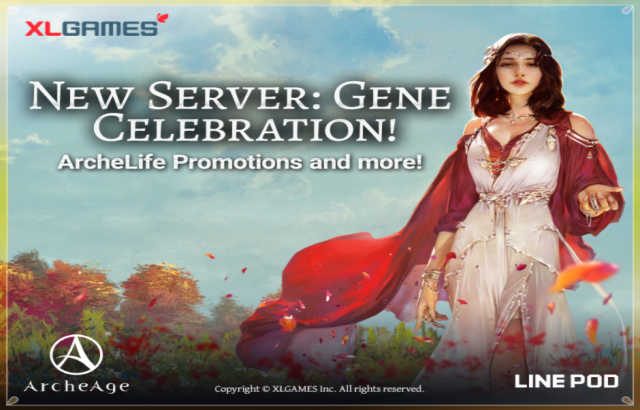 XLGAMES’ AAA MMORPG ArcheAge is introducing a New Server “Gene” as a part of its service coverage expansion in the Asian Region. In addition to its vigorous efforts in providing the best MMORPG experience for players, the developer will now offer a major content update “The Garden of the Gods” on the “Nui” and “Tahyang” Server, with the latter being a server exclusive to those who migrated from the existing Taiwan service.

XLGAMES will be opening its first New Server “Gene” on 25th February (Thursday) and unveil vast and expansive content up to the Western Hiram Mountains. Character creation is limited to one per account while the new and powerful races of each faction, the Dwarves and Warborns, are available from the very start.

The game will host celebratory events to commemorate the opening of the new server. Players in the “Gene” server will receive a variety of items as gifts to help their characters progress through the game swiftly up to a hundred hours of game played.

The latest content update “The Garden of the Gods” will be showcased in the current active servers “Nui” and “Tahyang.” This new content expands on the deep and immersive lore of the game where players will experience the magical place, the birthplace of the stories and history of Auroria. Old tales say that this is the exact garden that was created by the Mother Goddess Siol during the Dawn Age, the beginning of all life and everything in between in our world.

Other various contents will also be available for heroes to equip them for a far-reaching and breathtaking journey laid ahead of them. Exalted Hiram Guardian Equipment, Brilliant Erenor Equipment, will be introduced, and Erenor Golden Altar Dungeon, and the mighty Enhanced Anthalon, the new and powerful field raid boss in the Garden of the Gods, will be released as well.

Yong-Jin Ham, Producer of ArcheAge said “We are so thrilled and excited to introduce this New Server and “The Garden of the Gods” to the Asian Region players. We would like to take this opportunity to share the unique experience we have prepared to provide a genuine MMORPG experience for all of our new and veteran players alike.”

ArcheAge officially launched its South East Asian Service last year and since then had released various contents for the game including Seamless Open World, Large Scale RvR, Naval and Aerial Battles in English, Thai and Indonesian languages. Its service coverage will expand in February 2021 with traditional Chinese language as an additional game service language.

Details to the New Server, “The Garden of the Gods” update, and upcoming events are available on the official ArcheAge Asian Region Facebook Fan Page.