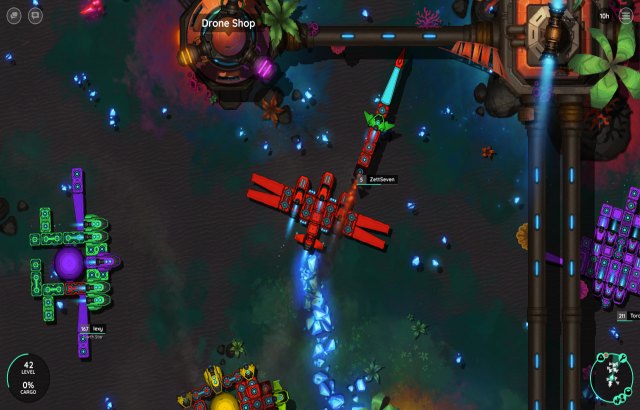 If designing, controlling and and managing your own space mining fleet sounds like a good time, check out Exocraft, now available on mobiles too.

Set on a dying alien world, Exocraft places you in command of your very own space mining fleet. Design custom spacecraft, manage your crew members and wield the elemental powers of your army of worker drones to defeat the ancient guardians that litter the landscape. Engage in action-packed battles and use your strategy and skills to conquer the richest resource deposits throughout this dynamic massively multiplayer world.

“Exocraft has its roots in simple IO games like Slither.io and Agar.io, but it grew to be something much bigger,” said James Simpson. “We wanted to create the next evolution of the genre with persistent progression, gameplay depth and an extensive community element that spanned across every platform/device.” The result is a unique combination of action, strategy, management and simulation that works seamlessly between desktop and mobile platforms.

Unlike most games that require limited size arenas, Exocraft’s world grows and shrinks with the online players. Everyone shares the same massive world and competes for the same resources, ensuring you and your friends can always play together and enjoy the same gameplay experience on any device.

GoldFire Studios was founded by James Simpson while at the University of Oklahoma in 2008. Simpson opted to keep GoldFire in Oklahoma due to the affordability, a growing tech scene and excitement around being on the ground floor of building a new industry in the state. The launch of Exocraft on mobile is another step towards those goals as the now 5-person team continues to grow with new types of experiences.

Download Exocraft for free on the App Store or Google Play.

Check out the gameplay trailer below: