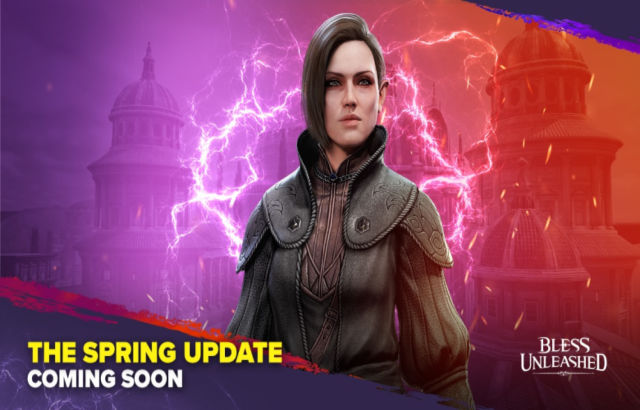 BANDAI NAMCO Entertainment America Inc. today announced that the all new Secrets and Scions Update is now live for Bless Unleashed. With this latest update, players unlock an additional story that takes players from the Ivory Dunes to Beoran in new Campaign Quests. Friendly allies and hostile forces such as the sinister Faceless await to encounter players throughout their journey where they’ll discover secrets and rewards along the way.

Also included is a new Invasion Quest that opens a new dimensional rift in Beoran, unleashing evil elementals, golems, and the undead that players must defeat to restore peace. Additionally, a new Two-Player Arena Challenge, The Wraith Commander, will test any duo to dodge and defeat the enemy and its vicious attacks. Lastly, overall improvements to the Prestige Quests and Reputation Systems have been included to where daily Prestige Quests will be added, which will make it easier for players to reach Exalted Status and advance Reputation gains with their desired faction.

For more information about Bless Unleashed on the Secrets and Scions Update please visit: https://blessunleashed.com/news/release-notes-the-secrets-and-scions-update

Bless Unleashed takes place in the untamed world of Lumios and presents a rich backstory created with hardcore MMO players in mind. The game features deep combo-driven mechanics, player customization, and cooperative (PvE) and competitive (PvP) multiplayer. Currently, the land of Lumios features 14 zones for players to explore and battle against countless foes within. There are nine powerful Field Bosses scattered across the wilds and more than 40 Elite Bosses who drop amazing rewards for heroes who can defeat them. Additionally, there are nine unique Dungeons to explore, enabling players to truly feel the dangers of Lumios. Players may also engage in battle across 10 Arena Challenges and 11 Lairs belonging to powerful foes who eagerly wait to dispatch unprepared adventurers. Developed using Unreal® Engine 4, Bless Unleashed brings unparalleled visuals to a fully realized fantasy world, offering one of the most stunning MMORPGs developed specifically for console players. Players adventure across an open persistent world where mythical beasts roam the land and player vs. player battles can take place at any time.