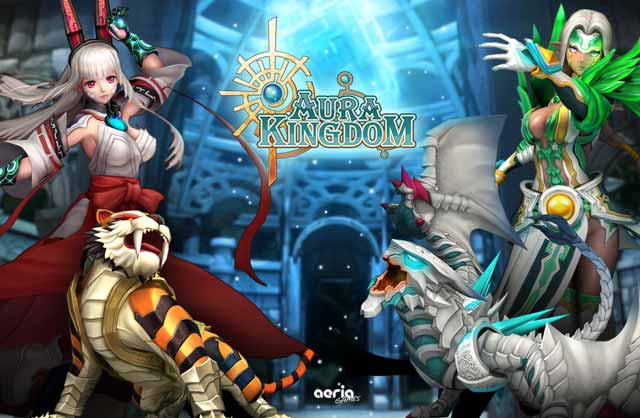 From the developers of Elsword, Shaiya and Eden Eternal, comes another anime-style fantasy MMORPG with yet again, a compelling backstory and sick visuals- Aura kingdom. It has been almost 3 years since the games release but here is a post-hype review to avoid the biasness and overreaction of MMO anticipators. The reason my title says as such is because Aeria Games have a reputation for ruining their games in a long run as they introduce features that does not suit the players and slowly cornering towards a pay-to-win system as to maximize the profit. None the less, the review below is strictly fair and only on the game, not the company.

Although many anticipated that the game combat system relies on free non-targeting combat system, that is not the case. In fact it is the latter where players are tab on to their targets and initiate skills. Some skills to require aiming to avoid pulling large aggro and proper distance. The game’s theme is completely anime-styled in a more 3D environment with the typical flashy movements and skills. Also each character has the option to “fly” much like Revelations Online. But in reality, it is more like jumping really high and gliding in the air to travel around the map. It isn’t fancy but still, I think I’ll take it! Plus, this allows you to save money as it travels almost or equally fast to mounts.

Aura Kingdom allows you to choose between 14 different classes and best part is, none of the classes are gender-locked. Thank God! Depending on your play style, you much choose which class would suit you the most but usually in tab-targeting systems, range heroes or tanky heroes are the best option unless you have access to the stores. Character customization seem to vary but is actually limited as to ensure the characters stay within the parameters to better suit the theme of the game. That is partly fair but what if I wanted to create a really fat chubby and lovable tank? Oh well, better not ruin the image of the game.

As for skills, each class is not limited as to how they should build their talent or skill tree. Thus, players are able to select and choose what sort of combination and explore their options. Similarly, players can share their “build” with other players.

More of the customization require in-game store bought items. As far as I am concerned, I do not think that trading of in-game currency is allowed so players should or must pay in order to enjoy these perks.

At the start of the game, you are given the options to choose Eidolons. Eidolons are basically pets and companions that provides you stat points as they level and evolve along your journey. You are given the option of a young male sprite-like creature, a chibi female mage, a dragon and a unicorn. A unicorn and dragon! The two fabled creatures that have peeked my interest. Note that your companions do not just passively hit over time, but they have skills as well. You have an awesome skill that requires a partnership between you and your Eidolon to execute, dealing a ton of damage. That is pretty cool!

As expected from a cute-and-cool anime styled MMORPG, the story quest or the main line of quest is more comical with a twist of cynical to it. Quests are not limited to kill and collect, but also interactive with NPCs with a short but rich backstory. The developers keep it short and simple to ensure they the long text do not bore out the players, allowing them to progress while keeping touch with their character’s story.

It seems the game does not require interaction or role-playing with other players, allowing players to grind and solo almost every monster. This really disrupts the immersion of the character and defeats the purpose of an MMO, that is to cooperate and play with other characters. The cutscenes also seem to only focus on your characters which ignore your companions or party.

As it is an Asian MMORPG, auto-pathing feature also exist in the quest system. To be honest, many players complain about this feature because they compare it to the botting system. Just clarifying this once and for all, this is not similar to botting system. This feature merely leads your character to the NPC to clear your quest or to the location of interest. I personally like this feature as I would like to save my energy, preparing myself for battle and strategic button clicking.

All in all, I would say this game was pretty cool. For those who are interested in anime-styled tab-targeting MMOs, do not stray away from this game. Try it out, you might like it. I know I did enjoy it.