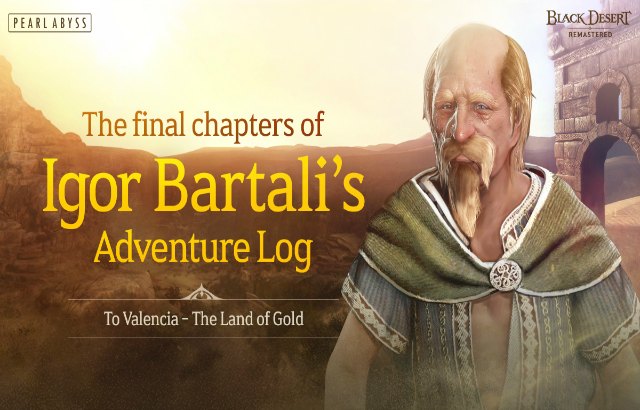 This week marks one year since Adventurers first experienced the remastered world of Black Desert SEA, and this anniversary will be one to remember as everyone is invited to join in this week’s celebratory events. New chapters of Igor Bartali’s Adventure Log can now be accessed, and two events will reward everyone who dives into the Black Desert world!

Igor Bartali, the traveler-turned-chief of Velia, has updated his Adventure Log with five brand-new chapters covering the lands of Valencia. Those who have finished his previous ten Adventure Logs can now take their explorations of the world further with advice from a famed explorer and follow in his footsteps to uncover the mysteries of this country, once known as the Land of Gold. His additional logs add numerous quests for Adventurers to tackle, and they can embark on this journey to receive a wealth of knowledge and great rewards!

The celebrations don’t end there—to further commemorate the one-year anniversary, a special 14-day check-in event begins today, during which Adventurers can grab themselves even more highly sought-after items like Advice of Valks, Shakatu’s Luxury Boxes, and Blessings of Kamasylve. To pile the prizes even higher, a general check-in event will take place from August 22 to September 25. A chance to grab more Advice of Valks, Fine Accessory Boxes, and Tough Whale Tendon Elixirs is not one to be missed, so Adventurers are ensuring that they don’t miss out!

One last surprise awaits those on their journeys in Black Desert SEA—change is on the horizon as future content and incoming updates, including changes to the Life Skills system, will be announced via the official website on September 4. For more information, visit the official website at sea.playblackdesert.com.