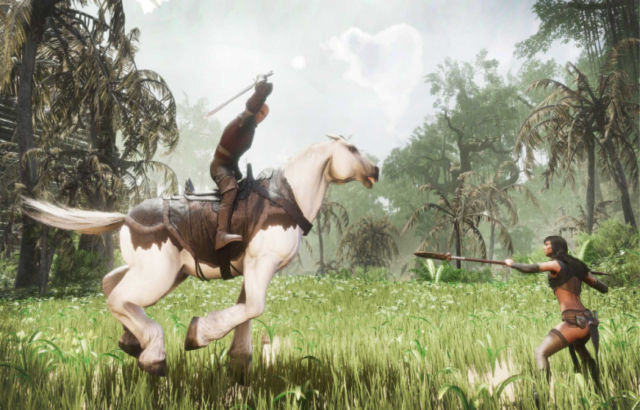 Conan Exiles: Isle of Siptah is due to release on all platforms on May 27th. In addition, Funcom is pleased to announce that the base game will be coming soon to Xbox Game Pass, making the popular survival game available at no extra cost for Xbox Game Pass subscribers.

Cataclysmic changes have been made to Conan Exiles: Isle of Siptah since the expansion was first released into PC Early Access on September 15th, 2020. The landmass has become bigger, the scenery more vivid and diverse – and a new religion has been added, allowing players to summon and control an avatar of the terrifying spider-god Zath. Zath, who has been added even to the base game, can rain throngs of spiders down on your enemies and lay cities to waste with venomous projectiles.

Additionally, three new factions of NPCs have moved to Siptah, and are threatening to conquer the island for their own selfish reasons. To the east, Stygian Mercenaries have begun rebuilding their colony of old. On the western shores, Black Corsairs have established terrifying strongholds for their raiding parties. And near the foreboding tower in the middle of the island, humans have begun allying themselves with the creatures of the outer dark. Known only as the Accursed, these demented souls are threatening to engulf the entire island in darkness.

The result is an island plentiful with lore, riches, and adventure to survive, build and dominate in, once the expansion is released in full on PC, Xbox, and PlayStation on May 27th, shortly after Conan Exiles’ 3-year anniversary.

Funcom is furthermore pleased to announce that Conan Exiles will be coming soon to Xbox Game Pass, making the game available at no extra cost to Xbox Game Pass subscribers on PC and Xbox alike. Expect the exact date to be announced shortly.

More details about the upcoming launch of Conan Exiles: Isle of Siptah will be given on the Twitch Gaming Show, today at 8 pm CEST / 11 am PST. In addition, Funcom today released a brand-new Isle of Siptah-trailer focusing on the many improvements that have been made during PC Early Access. Featuring in the video are Project Director Scott Junior and Senior Art Director Gavin Whelan.